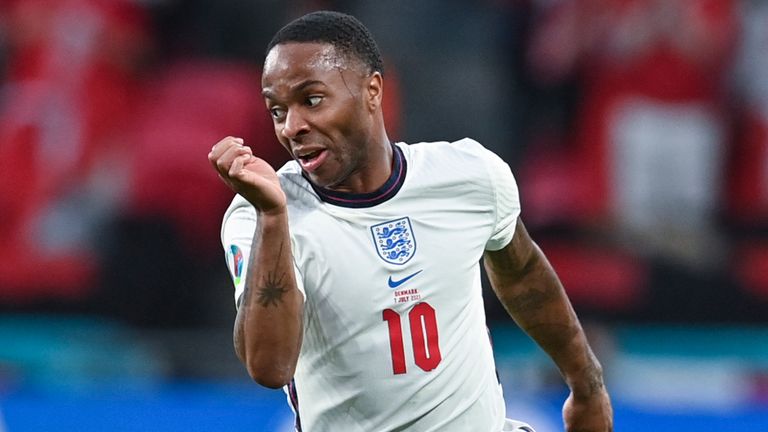 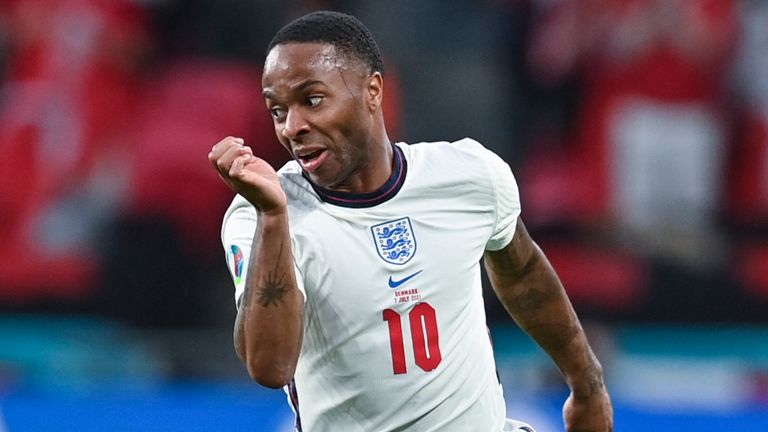 Sterling set the tone for his performance inside the first 20 seconds, sprinting away from Thomas Delaney and forcing the Denmark midfielder to haul him down and concede a free-kick. Kasper Hjulmand’s side couldn’t find any other way to stop him all night.

The 26-year-old has been outstanding throughout the tournament, scoring the goals against Croatia and Czech Republic that saw England through Group D then netting the crucial opener in the last-16 win over Germany. But his goals are just the start of it.

In fact, Sterling has been even better in games in which he hasn’t scored and on Wednesday night, back at Wembley after England’s quarter-final triumph over Ukraine in Rome, he produced his best display yet. Perhaps even the best display yet at Euro 2020.

Sterling was irrepressible, his speed and directness proving too much for Denmark time and again. The opener did not go down as his, instead credited to Simon Kjaer as an own goal, but everything positive England did seemed to revolve around him.

He completed a remarkable total of 10 dribbles over the course of the 120 minutes – only one fewer than every other player on the pitch combined. No other player had more shots.

There will be those who question whether he went to ground too easily for the winning penalty. It was certainly a soft one. But it was only thanks to his electrifying burst of pace that the opportunity came about at all. Sterling manufactured the opening himself.

It was just one of many moments of brilliance.

Even in the depths of extra-time, Sterling still had the energy to glide past red-shirted defenders and lead England away from trouble. He did it on both flanks too, seamlessly switching from left to right after Bukayo Saka was replaced by Jack Grealish in the second half.

Wherever Sterling appeared, danger followed. He left Denmark’s defenders dizzy. Italy’s could be next.

No clean sheet but Maguire excels Mikkel Damsgaard’s stunning free-kick was the first goal England had conceded in 691 minutes of action, a run dating all the way back to March. It presented Southgate’s side with their toughest test of the tournament but they passed it in impressive style.

Not that it looked straightforward at the time. England started the game ferociously, pinning the Danes back, pressing aggressively and flying forward in numbers. But the momentum had shifted. Damsgaard’s opener was no less than Denmark deserved.

England looked rattled at that point. From then on, however, their defensive performance, led by the excellent Harry Maguire, was almost impeccable.

The Manchester United centre-back has been a towering presence since his return from injury for England’s final group fixture and, like Sterling, he appears to be improving with every game.

His task was made harder on Wednesday night when he was harshly booked following an aerial challenge early in the second half. But that was Maguire’s only misstep – if it can be classified as one at all.

He dominated in the air, winning nine aerial duels, more than twice as many as any other England player, and on the ground too, making carefully-timed challenges and vital clearances and interceptions.

As is usually the case with Maguire, he was influential in possession as well as out of it. Southgate lauded his passing ability earlier in the tournament and there were plenty more examples of it on Wednesday night. In fact, Maguire made more passes than anyone else, at times bringing the ball out of defence himself before picking out a team-mate.

Maguire was a constant threat from set-pieces, in addition to everything else, and he was also ably supported by the players around him.

Kyle Walker impressed again, his recovery pace proving invaluable when snuffing out one early Damsgaard chance, and so too did John Stones. Both players benefit from Maguire’s presence alongside them. England’s defensive foundations are solid ones.

Southgate gets it right again

The victory, like the ones that came before it, owes a lot to Southgate too.

England’s run to their first final in 55 years is a culmination of five years of steady progress; five years in which the culture and mentality among England’s players has been completely transformed.

Southgate is responsible for that and he deserves credit for doing things his own way too. He has made big calls at Euro 2020 but all of them have come off.

He has been rewarded for his unwavering faith in Sterling, whose indifferent domestic season was of little concern to him ahead of the tournament, and for his refusal to bow to public pressure.

He decided to revert to a back three against Germany in order to negate the threat of wing-backs Joshua Kimmich and Robin Gosens but then opted not to do the same against Denmark. It worked.

England endured a difficult period in the first half but they otherwise blunted Denmark’s considerable attacking threat – Hjulmand’s side didn’t have a single shot between the 57th and 114th minutes – and carried plenty of their own.

Southgate dropped Jadon Sancho despite a fine showing against Ukraine but the decision to recall Saka was vindicated when the Arsenal youngster latched onto Kane’s through ball and set up the equaliser.

His substitutions were well judged too. Southgate resisted the urge to act early, with Grealish for Saka the only change in normal time, but Phil Foden and Jordan Henderson arrived just when England needed something different in midfield.

Denmark had made all of their changes at that point but Southgate could adapt as extra-time unfolded, and saved his biggest decision until after Kane’s goal, when Grealish was sacrificed for Kieran Trippier as he changed his system to see out the closing stages.

It was a bold move to withdraw a substitute – particularly one for whom there has been such a clamour – but just like the rest of his big decisions, it had the desired effect. England march on – and Southgate is leading the way.