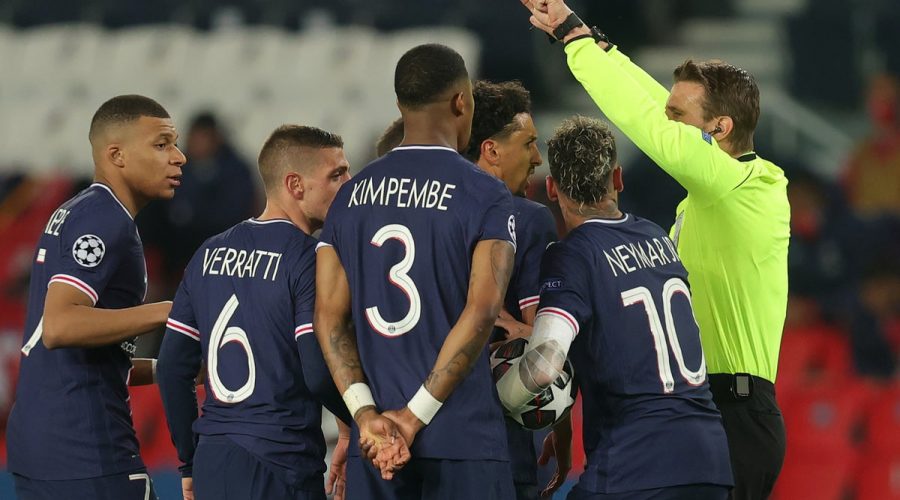 Keylor Navas – 6: Reacted well to keep out Silva at the back post in the first half. Did, however, put his side under pressure with a mistake later in the period. Was let down by his wall for Mahrez’s goal.

Presnel Kimpembe – 6: Allowed a gap to open up in the PSG wall as Mahrez put a free-kick into the bottom corner.

Marquinhos – 8: Put his team in front with a glancing header from a corner.

Alessandro Florenzi – 7: Pushed up without the ball when he could, bombed forward with it as well.

Marco Verratti – 6: Won the ball here, lost it there.

Idrissa Gueye – 4: Sent off for a poor, poor challenge on Gundogan in the second half amid a period of PSG frustration.

Leandro Paredes – 8: Gritty tackles; precise aerial passes on the diagonal; athletic, volleyed clearances… the midfielder did it all.

Neymar – 8: Was determined to make his mark. Mesmeric footwork had the City defence on edge, but the winger did the simple things well, too.

Kylian Mbappe – 7: Made all the right runs and was simply unfortunate not to be picked out at the right times. Also displayed impressive skill with the ball at his feet throughout.

Ederson – 7: Could do nothing to prevent Marquinhos’ opener. Swept well on a few occasions.

Kyle Walker – 6: Misguided run saw the right-back give away possession in the early stages, but he also made some key tackles and positive runs.

Ruben Dias – 7: Made a vital headed interception to prevent a lofted through ball from reaching Mbappe in the City box early on. Shortly thereafter, the centre-back charged out to make a big tackle.

John Stones – 7: Little to criticise in the case of the centre-back.

Joao Cancelo – 6: Blasted over a long-range effort in the first half, his most significant contribution to that point. Improved in the second half, pushing up into promising areas frequently, but was replaced by Zinchenko on the hour mark.

Rodri – 6: Was not at his best in the middle for City, though he did improve greatly after the break.

Ilkay Gundogan – 6: Was competent in midfield without hitting the level he tends to domestically.

Bernardo Silva – 7: Showed great determination to get on the end of a long ball at PSG’s back post, forcing Navas into action. Was denied an assist by Foden’s poor first-half shot.

Phil Foden – 7: Put a shot straight at Navas late in the first half, after receiving the ball in space in the PSG area; had to score. Encouraging performance otherwise and really grew into the game late on.

Kevin De Bruyne – 7: Nearly scored with an overhead kick in the second half, but up to that point had struggled to make his usual impact. Then netted with a whipped delivery that went all the way in.

Riyad Mahrez – 8: Seemed to track back to win balls more often than he usually would. Blasted a free-kick through the wall and into the bottom corner to give City the lead after the break.