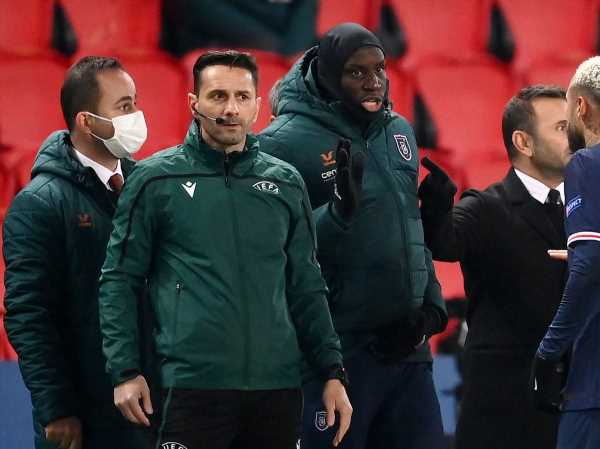 The Romanian fourth official accused of racism during Paris St Germain’s Champions League clash with Istanbul Basaksehir has been banned from refereeing until the end of the season despite being cleared of discriminatory conduct.

Sebastian Coltescu, who was investigated along with assistant referee Octavian Sovre over allegations that Basaksehir’s assistant coach Pierre Webo had been the target of racist language during the game in Paris in December, was sanctioned for “inappropriate behaviour” and ordered to take part in an educational programme.

A statement from Uefa’s Control, Ethics and Disciplinary Body said it had decided: “To suspend Mr Sebastian Constantin Coltescu from carrying out any referee’s function until the end of the 2020/21 season, i.e. until 30 June 2021, for the violation of Article 11(1) of the Uefa Disciplinary Regulations (DR) and Article 6(1) of the General Terms and Conditions for Referees officiating at Uefa Matches (GTC), i.e. for inappropriate behaviour during a Uefa match for which he was appointed.

“To order Mr Sebastian Constantin Coltescu to attend an educational programme before 30 June 2021 under the conditions determined by the Uefa refereeing services.”

Sovre, who was also cleared of racist conduct, was reprimanded and also ordered to take part in an educational programme.

The statement continued: “With this decision, the CEDB has therefore considered that both match officials violated Articles 11(1) DR and 6(1) GTC (obligation to behave in an appropriate manner), but not Article 14 DR (racism and other discriminatory conduct).”

Webo, whose red card sparked the confrontation from which the investigation arose, has been banned for one game for unsporting conduct.

The game at the Parc des Princes on December 8 was abandoned following the incident and played with different officials in charge the following night, when PSG swept to a 5-1 victory with Brazil international Neymar plundering a hat-trick.

March 8, 2021 Soccer Comments Off on PSG vs Istanbul Basaksehir fourth official banned until end of the season
NFL News