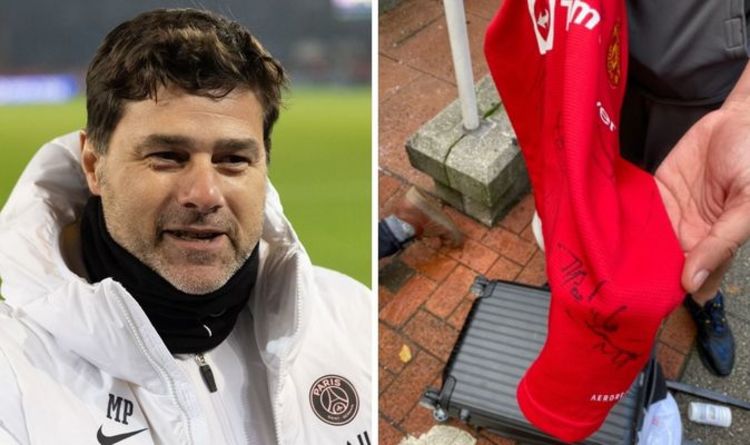 Manchester United are on the lookout for a new manager after sacking Ole Gunnar Solskjaer on Sunday and have been tipped to appoint Mauricio Pochettino if they can prise him away from Paris Saint-Germain. United chiefs apparently contacted the Parisians this week to initiate negotiations but were told the 49-year-old is staying where he is.

Pochettino is in Manchester as he prepares his side for their penultimate Champions League group stage game against Manchester City on Wednesday night.

And, according to Sky Sports, the Argentine was seen signing his autograph on a United shirt before the crucial encounter.

A Red Devils fan apparently approached Pochettino inside the PSG hotel and the former defender was happy to scribble his signature on the front of the red shirt.

Poch took over at Parc des Princes in January but failed to lead his team to the Ligue 1 title last season as they finished one point behind surprise champions Lille.

PSG are doing much better this season, however, and are a staggering 11 points clear of Nice at the top of the table.

They are second in Group A of the Champions League and will be looking to cement their place in the knockout stages of the competition at the Etihad Stadium.

PSG defeated the Citizens 2-0 in France back in September but have dropped four points in their opening four games after drawing against Club Brugge and RB Leipzig.

Pochettino has built a mouthwatering squad in Paris, with blockbuster stars Lionel Messi, Kylian Mbappe and Neymar all plying their trade at the club.

But last month reports emerged that PSG players and the board still have their doubts about the former Tottenham boss.

Poch is contracted to PSG until the summer of 2023 and will be hoping to add more silverware to the French Cup he won last season before he departs the club.

And this week he was keen to distance himself from the vacant role at United.

“I am so happy at Paris Saint-Germain,” the former Argentina defender said ahead of the clash with City.

“What another club are doing is not my business – I need to be focused on PSG.

“I’m not going to make the mistake of talking. You know everything we’ll say, it was in the past when at Espanyol when I said my dream was to meet Sir Alex [Ferguson].

“Anything I say now is going to be misunderstood and out of context. I was a PSG player. I love the club. I love the fans. We are fighting in Ligue 1 and the Champions League.”