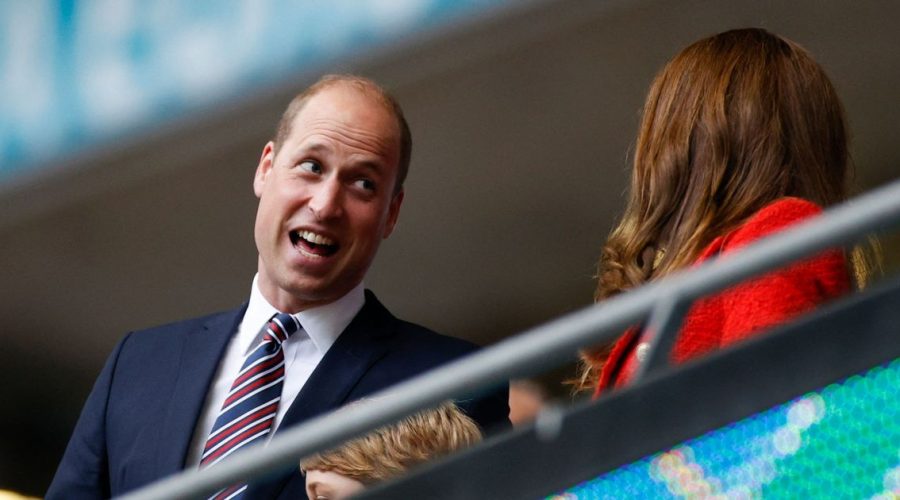 The Duke and Duchess of Cambridge, Price William and Kate Middleton, were at Wembley with Prince George for England's clash against Germany at Wembley – and the emotion got the better of them.

The Royals were spotted by BBC cameras during the fixture, and were highlighted as Raheem Sterling opened the scoring during a dominant second period for England.

In a mixture of delight and relief, Aston Villa fan Prince William threw his arms into the air as the Manchester City forward found the back of the net following Luke Shaw's cross.

Kate could also be seen clapping as George watched on in apparent awe, with the Three Lions going on to grab another goal through captain Harry Kane shortly after.

While Prince William, President of the Football Association, and his son wore rather smart suits, Kate wore a bright red blazer which matched the Wembley seats which were taken to by 40,000 fans on Tuesday.

The Cambridges were also pictured chatting to David Beckham ahead of kick-off, and looked relived to see Southgate's men progress into the quarter-finals.

Ed Sheeran and his wife Cherry Seaborn were also in the private box, as was former England goalkeeper David Seaman who looked delighted at the success of his former colleague Southgate.

Sterling told BBC One after the final whistle: "Doing it for your country will always be special and it is a special moment for me.

"I celebrated and for half a second I thought 'let it not be offside'. Really happy it went in and got the win.

"We knew the intensity we can play at and not a lot of teams can deal with it. The two players in midfield, Declan Rice and Kalvin Phillips, ate up the grass and were animals in there.

"We take it game by game, recover and focus for the next one."