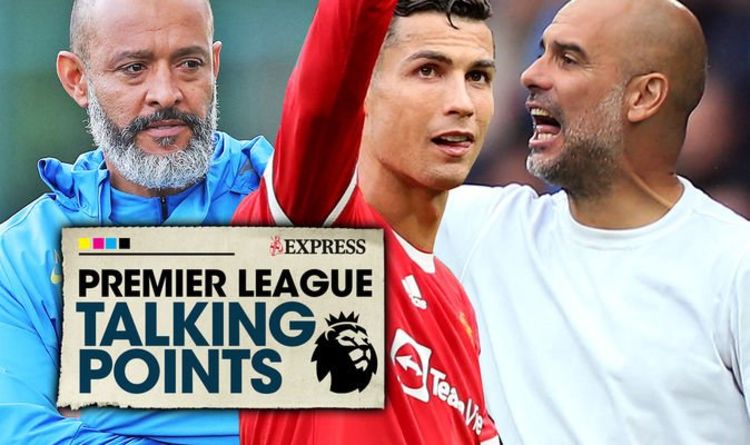 With the Premier League returning with a bang – or rather a ‘siuuuu’ – Express Sport reporter Matthew Dunn looks back at the talking points from the weekend’s Premier League matches including a less-than-perfect 10 for Pep Guardiola, the silver lining to Harvey Elliott’s cloud… oh, and Cristiano Ronaldo.

RONALDO’S RETURN NOT JUST AN ACT

Can it be significant that Cristiano Ronaldo’s second coming sparks Manchester United’s return to the top of the table? I mean, it is only September after all…

It is over 30 years since Sir Bobby Charlton no less first dubbed Old Trafford the Theatre of Dreams and at times it has struggled to pull off such a grandiose billing.

But step forward into centre stage once more one of the world’s greatest players and forget the smell of the greasepaint, the roar of the crowd is likely to be worth a dozen or so points to Manchester United in the coming months.

Ronaldo may not be able to produce doubles every week, but if he can galvanise the crowd and provide a beacon for young players like Mason Greenwood and Marcus Rashford, perhaps Ole Gunnar Solskjaer’s team can top the bill again.

MARCHING ON TOGETHER TOWARDS A BETTER FUTURE

Leeds fans have always been known to revel in their notoriety but if events on Sunday are anything to go by, perhaps there is some light at the end of a very long tunnel for all supporters in this country.

The standing ovation afforded to poor Harvey Elliott from both sets of fans as he was stretchered off the pitch shows a continuing encouraging trend towards more humane behaviour at games.

The moronic excesses of the idiots on their own back doorstep in the Euro 2020 final perhaps literally hit home.

The reaction to Bukayo Saka, what feels like a more supportive stance towards taking the knee and just a little bit of consideration for others indicates that football fans are appreciative that they are back at games.

It is more of a privilege than ever, after all.

Fewer than 10 shots per game so far – 20 per cent down on dour Jose Mourinho – and on Saturday Harry Kane had none of them.

It would be a cheap shot to say you could hide a lot of things behind Jonathan Moss. But a controversial penalty and less controversial sending-off for Japhet Tanganga should not disguise how ordinary Tottenham were on Saturday.

The problem is that Daniel Levy sacked Mauricio Pochettino and demanded a winner. Then he sacked that winner and demanded an entertainer. Now he has neither.

Now he has to stomach taking an injury-depleted squad deep into France for the ignominy of a European Conference League fixture.

This weekend they relied on Bernardo Silva – almost as much as they relied on Ederson at the other end – to snatch the three points and, lo and behold, they join United, Liverpool and Chelsea in an already ominous-looking top three.

But on an afternoon when both Romelu Lukaku and Cristiano Ronaldo both individually produced more than Manchester City as a whole could muster from an untidy tussle in Leicester, Pep Guardiola might now perhaps be wondering why on earth he did not sign a striker in the summer.

It would make each of the 38 hurdles that have to be jumped just a little bit less fraught with a natural goalscorer at the pinnacle of all your possession.

CALLING OUT FOR A TAKEHIRO

When you have not won all season, a 1-0 win against Norwich of all teams is not about to raise the depression for long.

But in the midst of Arsenal’s success on Saturday there were finally a few green shoots – signs that Mikel Arteta’s well-disguised masterplan is finally taking shape.

The debut for Takehiro Tomiyasu seemed to give the Gunners some much-needed sense of identity – albeit against a team hell-bent on breaking all records with their plunge out of the division.

His measured performance on the right side of defence is unlikely to make him an Emirates legend, but he gives Kieran Tierney freedom to attack more on the opposite flank while maybe giving Nicolas Pepe the space finally to show what that transfer fee was all about.

Results are key now for Arteta, but with Burnley, Wimbledon and Tottenham in their next three games it feels like something of an acid test to see if the Gunners have the resolve they need to dig themselves out of their current doldrums.