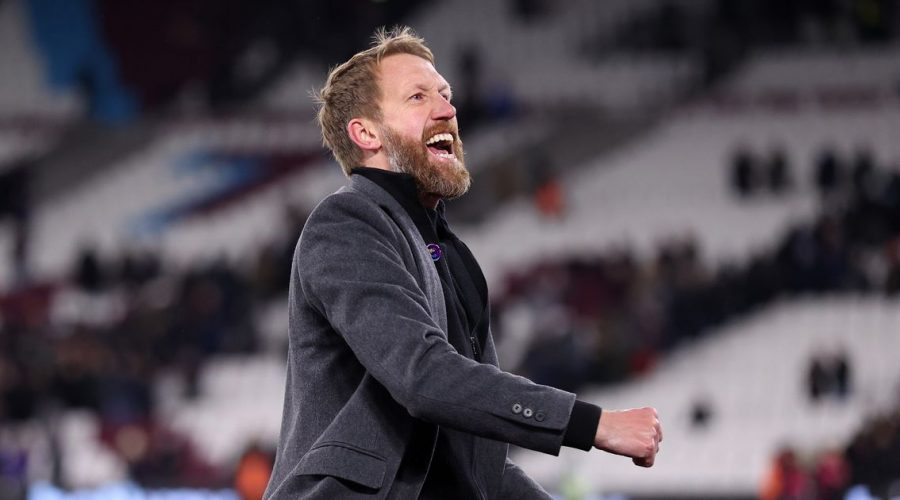 Manchester United are missing a trick overlooking Graham Potter – and so is the rest of the Premier League.

He's not going to be the next United manager. But say Brighton win the FA Cup this season, surely he's going to get offered a bigger job?

It's like English managers don't exist for the big clubs so they're hardly ever given a chance at the big jobs.

But I think Potter is a great manager. Brighton gave Chelsea the absolute runaround the other week, went to Everton and won. They play nice football too.

He's definitely got it. Didn't Pep Guardiola call him the best young coach in the country? What if he wins the FA Cup this season? Then his stock goes majorly through the roof.

Brighton haven't won anything in god knows how long but they're not going down this season and should be prioritising an FA Cup run.

If Potter somehow takes them all the way and lifts the trophy, he's off to a bigger job for sure.

I watch Brighton play football and think why couldn't he be United manager? Is it because it's only Brighton and he's not a name, not a foreign manager?

I don't see why he couldn't manage United. They play great football, Brighton. Imagine if he had players like United do at his disposal!

But you know it won't happen. He's not fashionable. But if I was a United fan I'd be watching Brighton thinking I wouldn't mind that kind of football at Old Trafford.

I'm not sure about Ralf Rangnick at all. He's come in and everyone's talking about him like he's invented football and is some sort of genius.

United are as bad as they were under Ole Gunnar Solskjaer! Nothing's changed has it? Let's be honest.

What's wrong at United? Everything! I'm watching the Wolves game the other day and he's playing Scott McTominay and Nemanja Matic in midfield.

But they're getting run ragged by Joao Moutinho and Ruben Neves – and the manager sits and watches it and does nothing for 60 minutes, without changing a thing.

Moutinho is 35 years old and he's running the show against United. At Old Trafford. He was the best player on the pitch. Everything is wrong at the moment.

Bruno Fernandes did alright when he came on. But he took Mason Greenwood off, and he was their best player!

Marcus Rashford came on and did nothing. Jadon Sancho is struggling for confidence. Runs at the full back, turns around and rolls the ball back!

It was poor all round. It was cringeworthy. Can you see a Graham Potter team playing like that? I don't think so.

Bringing in Rangnick was the easy option. The lazy option. The players know he's not going to be the manager for long, so right from day one you're up against it.

They should have sorted it out when Solskjaer was sacked. Now, I don't see how it's ever going to change.

Someone should be in there now sorting out who they want for next season. I'd love to have seen someone like Potter given that chance.

But look where all the English managers are in the Premier League. They're all at clubs who are a million miles away from being contenders.

We've got Sean Dyche, pulling up trees at Burnley for god knows how long, keeping them up with no budget.

Eddie Howe's had to take the Newcastle job. They're both in the bottom three. So is Dean Smith, who was bang unlucky at Aston Villa.

Had a good team, now he has to go to Norwich.

Steven Gerrard has just come in so he's going to need time. But the others, it's like people think they are where they should be, around the bottom three.

But that's what happens if you're never going to be offered the bigger jobs.

Pierre-Emerick Aubameyang is done. Time to break the bank and get Dusan Vlahovic

Pierre-Emerick Aubameyang is finished at Arsenal. He won't be coming back from the Africa Cup of Nations.

They should be breaking the bank to get Dusan Vlahovic in from Fiorentina in the summer – because he would make them title contenders.

I've heard he's not interested in Arsenal right now and I can understand that. But he might change his mind if they finish in the top four and offer him a lorryload of money.

Arsenal would be able to play him every week because Aubameyang will be gone. Alexandre Lacazette will probably be gone. And so will Eddie Nketiah.

They will need a goalscorer, and Vlahovic scores goals. He's also still young so he should get better and you't not wasting money paying a 29-year-old on the way down.

I think there are good things happening at Arsenal. Mikel Arteta has got them playing well. But they need a proven striker next season.

He's signed a keeper, defenders, full backs, midfielders and a No 10, promoted kids on the wings – a proper centre forward could be the missing piece.

I'm not saying they'll win the league if they get Vlahovic. But they'll have a chance to make it a four-horse race at least.

Romelu Lukaku will win something for Chelsea this season – but Thomas Tuchel has already blown the title by dropping him against Liverpool.

They had to win that game to have any chance of chasing down Manchester City. Now they're ten points behind and Liverpool are still right behind them.

People say Tuchel was right to drop him. But you know he's not bombing him out of the club, so why drop him for your most important game of the season?

He came back a few days later against Tottenham. It makes no sense. It's biting off your nose to spite your face.

Lukaku will play every game now. It will all be forgotten. And he will score goals. He's a great striker. They will win something this season because his goals will carry them.

I thought he'd showed a lot of balls playing against Spurs. I think he did alright. I think there's an issue because when he got back fit he had to sit on the bench.

Lukaku is one of those players who needs an arm around his shoulder and I don't think Tuchel is showing him enough love.

But Chelsea are a better team with him in it, so for me he has to play every week now, and I think he will.