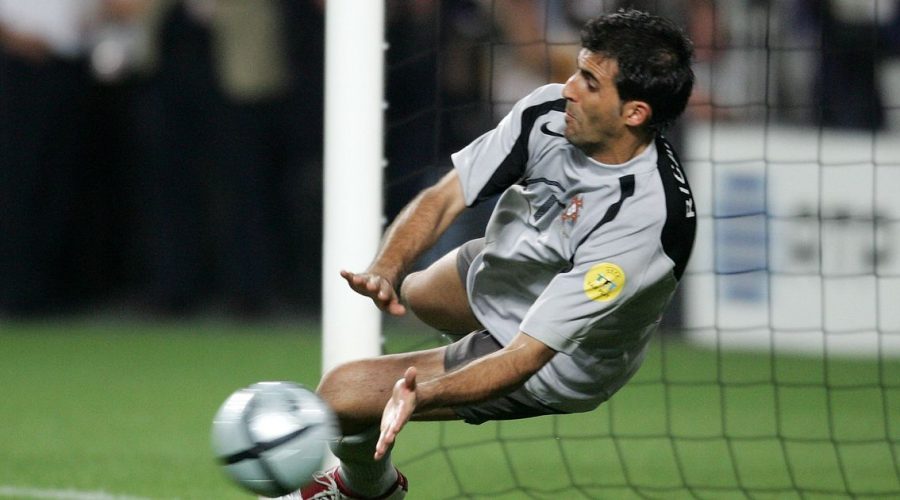 England were dumped out by Portugal on penalties at both the European Championship and the World Cup two years later, with Ricardo proving the hero on each occasion.

After a 1-1 draw in normal time, Rui Costa fired the hosts ahead in extra-time before Frank Lampard levelled proceedings to send the quarter-final tie to spot-kicks.

Three Lions captain David Beckham sent the first effort of the shootout flying over the crossbar, but Costa then did exactly the same with Portugal's third.

Three more successful penalties came from both sides before Darius Vassell stepped up for England, and Ricardo famously chose to remove his goalkeeper gloves when facing him.

The bizarre move worked wonders for the Portugal shot-stopper, who denied Vassell from 12 yards and then rifled home the winning penalty himself to dump England out in the last eight.

But recalling the match 17 years later, Gomes, who played the full 120 minutes at the Estadio da Luz, has revealed that Ricardo was not originally down to take that penalty.

Who do you think will win Euro 2020 this summer? Let us know in the comments section below.

The 44-year-old, speaking exclusively to Ladbrokes at the launch of their European Championships 5-a-side Bet, said: "The game against England in 2004 was an amazing occasion to be a part of. In one moment we were down, then we took the lead in extra-time through Rui Costa, and in that moment we thought the game was done.

"It was late in the game, we were at home, it was an amazing goal, but right after, Frank Lampard equalised.

"I think it was fair that the game went to penalties, although it is always harsh on one team when a game goes to that point, but you can't play forever. There has to be a winner – and on that night it was us.

"Penalty shootouts are always a bit like a lottery, so you need to rely on a lot of factors to help you to win. The first penalty of David Beckham's went straight over the bar, and that gave us a real confidence boost.

"And then at the end, our goalkeeper, Ricardo, takes off his gloves for the last penalty and saved it before going on to score the winner.

"We had no idea he was going to take his gloves off for that last penalty. I think it just went through his mind at the time, it was an instinctive decision – you know how goalkeepers are. It's a way of provoking the attacker.

"I remember being stood on the halfway line and I just thought 'what is he doing?' But it all happened so fast.

"Ricardo wasn't supposed to go on to take the immediate penalty afterwards, but he raised his hand there and then to ask for permission.

"He was allowed to take the next kick because we all thought if he's just managed to save a penalty without his gloves on, then he has to score the winner."