In England there are the boys of ‘66. Across the border in Wales, they also now have a team which has assumed a similarly mythical significance. All Robert Page’s side have to do in the coming weeks is match them.

Sam Vokes was a member of Chris Coleman’s side at Euro 2016, and sealed Wales’ famous win over heavily fancied Belgium in the quarter-final in Lille, popping up with four minutes to go to make it 3-1 and spark the party to end all parties in a country that, quite simply, had never seen anything like it.

The inhabitants of a small town in northern Brittany were pretty pleased too.

“Being in one country, the excitement was there (in 2016), there were banners everywhere you looked, there was a real buzz,” he says. “It’s funny, we stayed in a small town in the north of Brittany called Dinard. It’s only a small place but they really embraced the Welsh culture, you would see Wales flags flying outside people’s houses.

“There weren’t any Welsh people around the town because it was in the middle of nowhere but the locals loved us. You could obviously see the excitement back home and the kind of following we were getting but everything we were seeing on social media and in the news seemed a million miles away in our small camp in the north of France.

“It would be surreal. You would see all the fans and your family celebrating and then you would be back in your hotel room that evening in a very quiet town.

“It would be quite funny driving to training in the morning, though. You would see one house with a French flag outside and the house beside it with a huge Welsh one.”

Every tournament has its underdogs, and five years ago Coleman’s men fitted the bill perfectly.

What started out as one big adventure and a sense that Wales were just pleased to be in a major tournament for the first time in 58 years, soon turned into something a whole lot more enticing.

A win in their first match against Slovakia, followed by a last minute defeat to England and then a 3-0 mauling of Russia, meant Wales finished top of the group, earning bragging rights of Roy Hodgson’s men despite that 2-1 defeat in Lens.

England could have been forgiven for wishing they had exited at the group stage after being humiliated by Iceland in the last 16.

“Just to get to the tournament was a huge achievement at the time,” says Vokes.

“It was such a big thing for the country. Only a few years before that I had been playing at the Millennium Stadium and there were only 8000 people in there for some games supporting us.

“We went through some dark times, we were over a hundred in the Fifa rankings at one point, so to see the progression and see that rise was just incredible.”

A 1-0 win against Northern Ireland proceeded that spell-binding win over Belgium as Bale and his teammates sprinkled a liberal helping of Welsh stardust over the tournament. 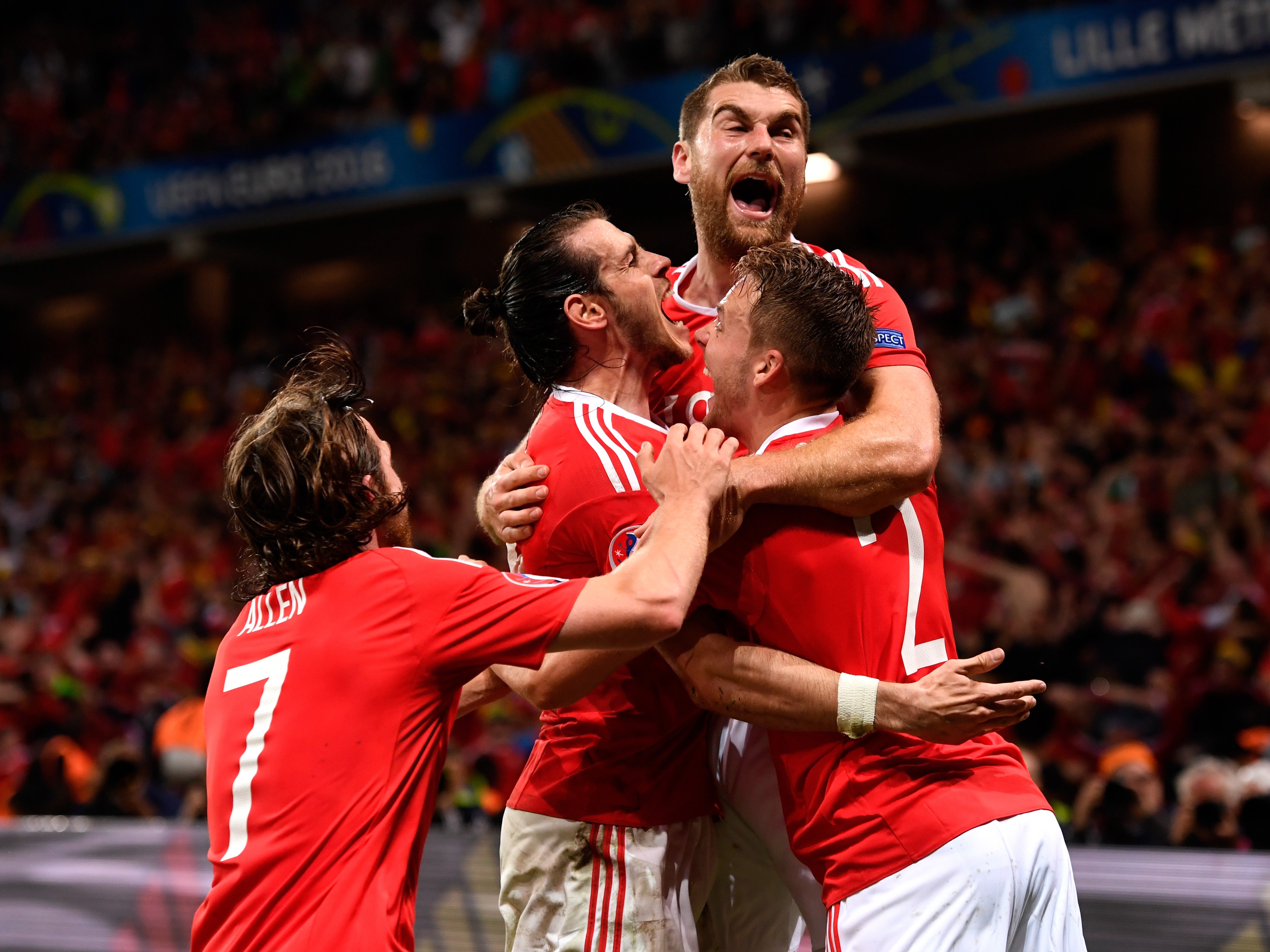 Sam Vokes scored in the famous win over Belgium

Repeating that magic in tournament spread across Europe might be a tough task, but Vokes is confident that navigating a group containing Switzerland, Italy and Turkey is well within their compass.

“It’s important to get a good start,” he says. “We started well in 2016, getting the winner against Slovakia in the last 10 minutes and that really set the whole thing off.

“I think we’re going to need something similar against Switzerland to get us up and running. Can Wales get out of the group? Definitely. then who knows? Once you get into the last 16 then its effectively a play-off every match.

“It would be nice to have the points on the board going into that last group match against Italy. Hopefully we will have qualified and that match becomes almost like a free hit.

“There has been a big transition in terms of players since Euro 2016. We’ve seen a lot of good young players come through under Ryan Giggs and now under Pagey (Robert Page).

“But it’s important to have those older heads in (Aaron) Ramsey, Gareth Bale, (Joe) Allen and Chris Gunter, who now has over 100 caps. You need those old heads to help the younger boys and pull them through the tough games.”

Bale was a force of nature at Euro 2016, and Wales will need him to be similarly influential in the coming weeks.

“He was just ridiculous in the Euros,” says Vokes. “He’s a superstar but when you’re playing alongside him, then he’s just another team-mate really, just one of the lads.

“A lot of us are very lucky to have come through the younger age groups together so we’ve been playing together a long time. He never changed is probably the best way to put it. He loves going away with Wales and I think you see that passion and that pride every time he puts on that shirt.

“It’s great to have someone like that in your armoury because he can produce that little bit of magic that you need to win games and he has done it so many times.”

Another appearance in the last four is a tall order but, as they proved in France, anything is possible.

Expect the inhabitants of Dinard to be dusting off those flags in the hope the Welsh dragon can fire again.