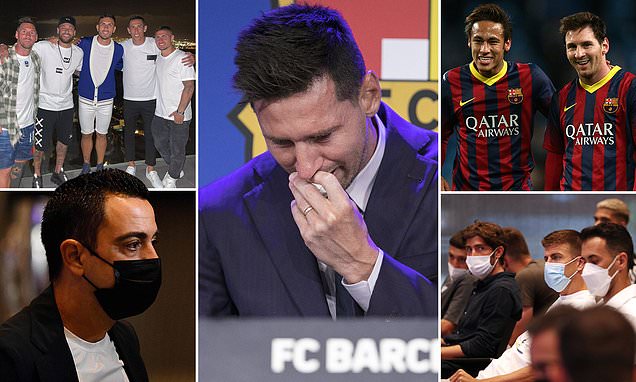 PETE JENSON: Lionel Messi broke down in tears before he even started his goodbye but the message was clear: he said ‘the sadness will pass’ and he wants to ‘keep winning’… that it will be with one of Barcelona’s rivals is a fact that will haunt the club

Leo Messi started to cry before he even began his goodbye speech at the Nou Camp on Sunday but behind the tears was a chilling message to Barcelona fans – I want to win lots more trophies and I will probably be doing it at your biggest European rivals Paris Saint-Germain.

Asked about the likelihood of him leaving his Adios at Barcelona to say an immediate Bonjour to his new club, Messi said: ‘The deal is not closed but PSG is a real possibility and we are talking.’

Messi has won 35 trophies at Barcelona – only Dani Alves has more medals – but he is far from finished and he added: ‘My aim is to keep winning, win a Champions League, catch Dani Alves.’ 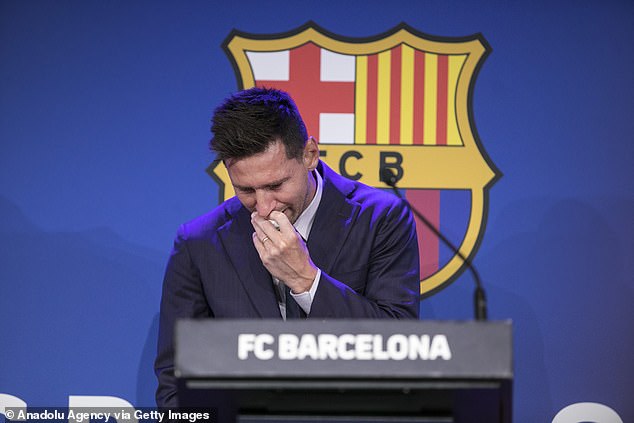 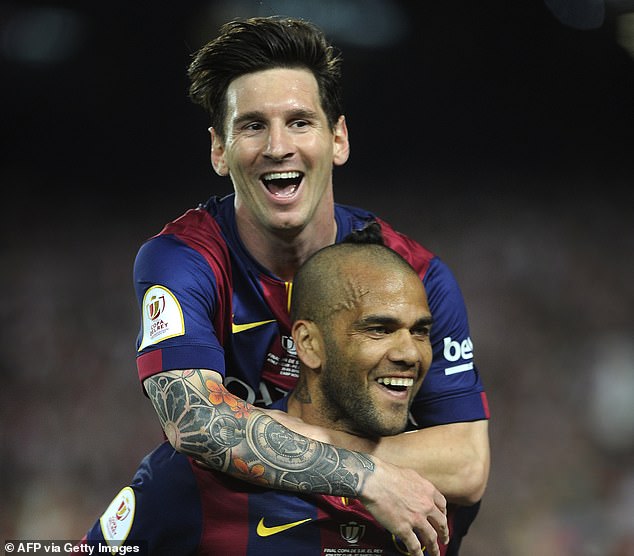 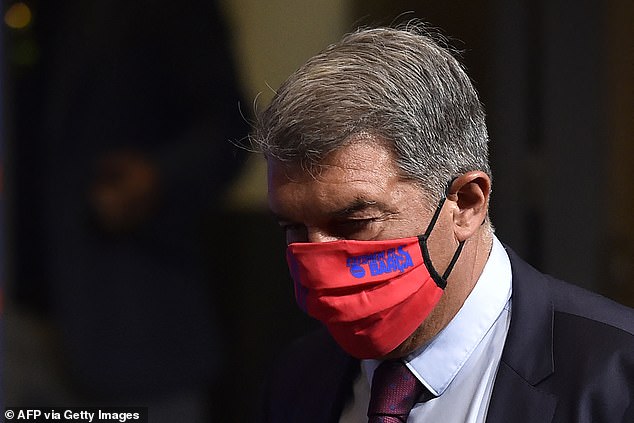 The prospect of Messi winning with the French side must be haunting Barcelona president Joan Laporta, who sat front row staring up at the ‘more than a club’ sign above Messi’s podium.

Messi will have no mercy once he starts playing. ‘When I leave here I will be even more sad but I will keep on playing football which is what I most love to do and I’m sure it [the sadness] will pass a bit.’

The emotional final appearance in front of former team-mates Xavi Hernandez and Carles Puyol, as well as the current squad and coach Ronald Koeman, also left many questions unanswered.

It’s still not clear why with three weeks left of the transfer window and with Messi’s father jetting into Barcelona on Wednesday under the impression his son was going to sign a new contract, the club announced on Thursday that they were giving up on keeping him. 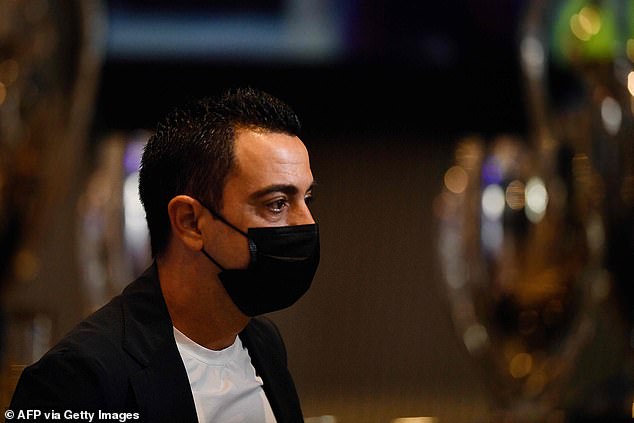 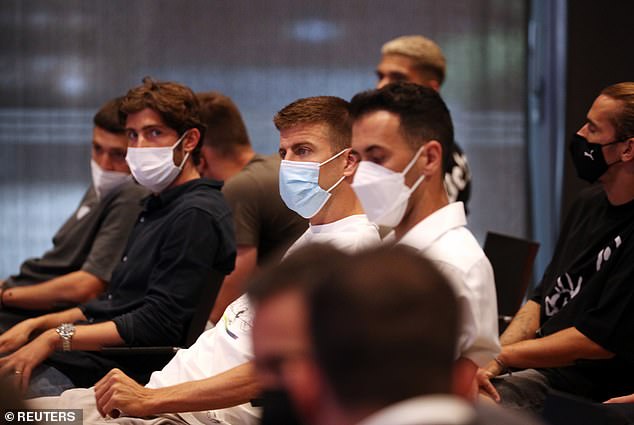 Gerard Pique, Sergio Busquets and Antoine Griezmann were also watching on in the room

Messi said: ‘As the president [Laporta] said everything was done, but it didn’t happen because of LaLiga’.

Later he declined to send a personal message to LaLiga president Javier Tebas whose restrictions on clubs’ spending ultimately led to Barcelona giving up on keeping their greatest ever player.

Could he have played for free? Three times questions from the floor skirted around whether or not that possibility had crossed his mind.

He repeated several times: ‘I did all I could’ and shot down suggestions the club asked him to make further wage sacrifices.

He said: ‘I took a 50 per cent wage cut and we had closed the deal. The club did not ask anything else from me. They did not ask me to take a further 30 per cent cut, that’s a lie. We did everything possible.’ 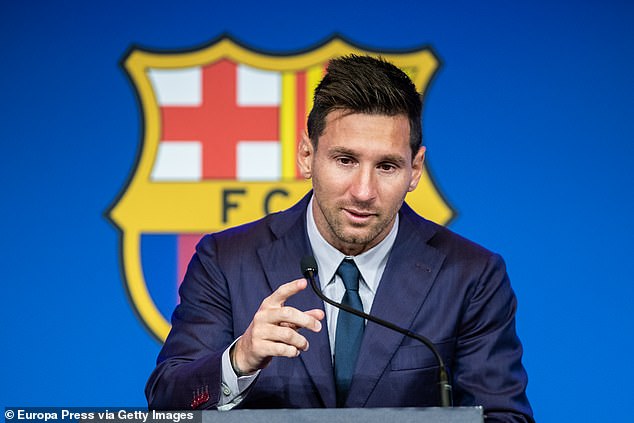 There was a sadness to the whole affair.

Messi’s 16-year club career has been the greatest of any player at one club in the game’s history. His send off should have taken place in a full Nou Camp with him in his playing kit and not his suit.

Head bowed and with a handkerchief to his face when he first walked onto the stage he resembled the shy awkward teenager that first turned up at the club 21 years ago.

Not only has his send-off fallen short but in many ways there is a feeling that Barcelona should have won more with him in the team.

‘I’m left regretting not having won another Champions League,’ he said. ‘I think about that semi-final with Liverpool, and the semi-final with Pep [Guardiola] against Chelsea. But that’s football sometimes the other team wins.’ 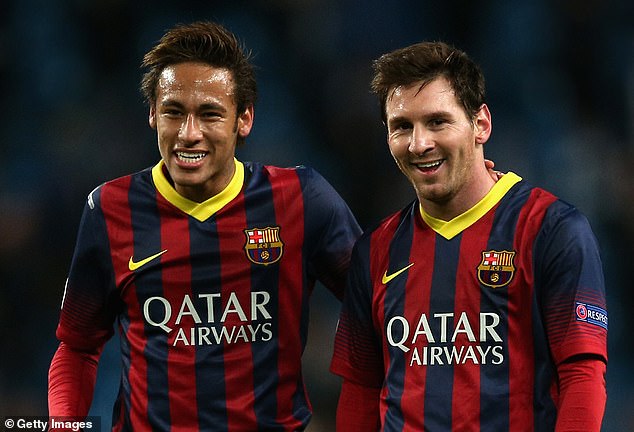 The fear for Barcelona now is that the ‘other team’ winning will be PSG and Messi will be celebrating alongside Neymar as they do it.

‘They have spoken a lot about that photo with the PSG players in Ibiza,’ Messi added.

‘But it’s a stupid thing. I was going to meet up with [Angel] Di Maria and [Leandro] Paredes and Neymar, who was in Ibiza called me and we all got together.

‘They were even joking with me that I would be joining them in Paris. Then what happened happened but there is nothing suspicious about that photo.’

That will be small consolation among Barcelona supporters when the goal celebration photos start to appear of him in a PSG shirt. He’s hungry for more glory but it will not be with Barcelona. 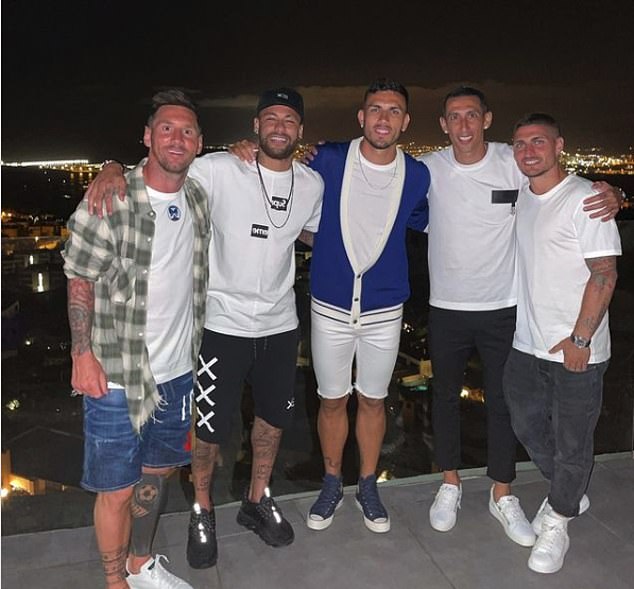 August 8, 2021 Soccer Comments Off on PETE JENSON: Lionel Messi's message to Barcelona was a chilling one
NFL News