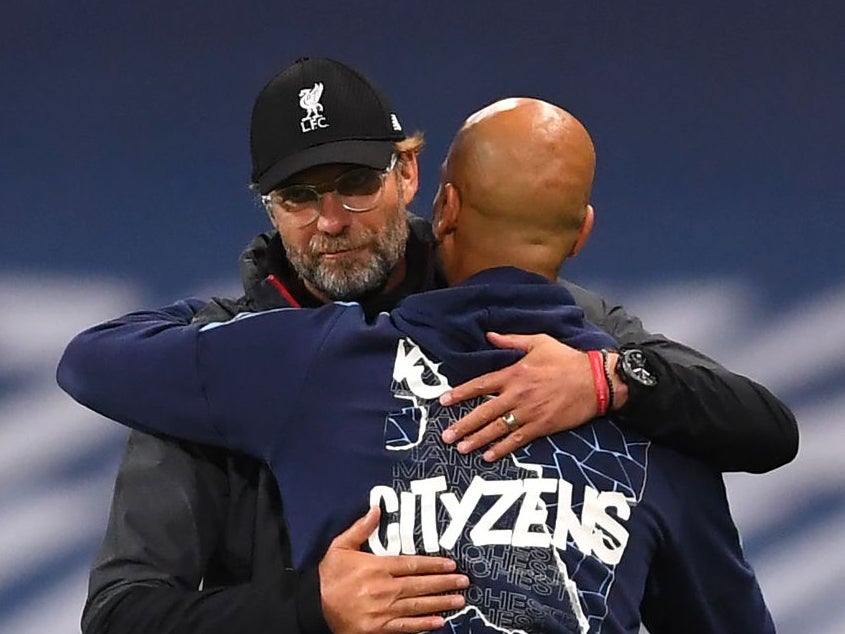 That more exclusive group illustrates how Guardiola faces the more difficult challenge, the next step up from Klopp’s.

The reasons for that are obvious, and also reflect why Liverpool currently look in better shape.

The champions’ issues so far have mostly come from injuries and a relatively superficial raggedness. It was always going to be impossible to sustain the levels of 2018-20, but the base quality remains so high – especially in attack.

Guardiola isn’t trying to sustain. He’s attempting to rebuild. It’s a very different challenge, that brings in the motivation of the manager as much as the players. That is exacerbated by the fact this is the first time Guardiola has stayed at a club beyond four years. Hanging over this is the uncertainty surrounding the Catalan’s new contract. This situation warrants as much hunger from the manager as the players.

We’re thereby into unknown territory, which is also why this very meeting feels much more unpredictable than at any point in the last few years.

Many of its key players have gone, although they are pretty much all from the City side. This is why that first Guardiola team is probably finished in its best form, even if some totemic figures remain. Kevin De Bruyne, Raheem Sterling, Ederson and Kyle Walker almost have to be the Ryan Giggs, Paul Scholes and Gary Neville figures for him, setting the standards for the budding stars coming in.

The reference such United players offer reflects why Ferguson remains the ultimate example in all this.

Guardiola will doubtless encounter some of the challenges and issues the great Scot found during his transition periods.

“When there is a sudden rush to solve problems, mistakes are made,” Ferguson wrote in his second autobiography, particularly referencing 2003 to 2006. “We were at our best when we worked from a plan, over years… That wasn’t a great period for us in terms of trophies. Yet when you’re managing change, you have to accept quieter spells and acknowledge that transformations take longer than a year.”

This might be a challenge for Guardiola, and perhaps one he succeeds in. Sunday will start to tell. It just won’t tell us who wins the title. This meeting of the most recent champions won’t declare the next.