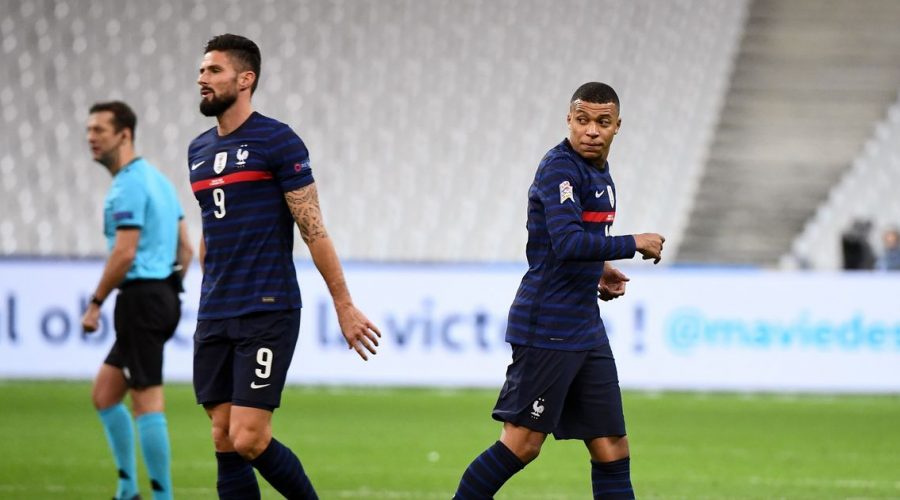 Paul Pogba has played down the tension in the camp amid a suspected row between Olivier Giroud and Kylian Mbappe.

There have been reports that the two forwards have infuriated one another ahead of the European Championships.

France are one of the favourites to win the tournament, following up their World Cup victory in 2018.

In a warm-up match against Bulgaria on Tuesday, Les Bleus won 3-0 – indicating that all is well.

Giroud scored twice late-on as he looks to break his national record as all-time highest goalscorer – which currently is held by Thierry Henry on 51 while the Chelsea star is on 46.

But the forward was less than impressed with his team-mates for what he perceived was a lack of service.

“I was a little quiet because, sometimes, I make runs and the balls aren’t forthcoming. I am not saying that I always make the best runs but I am seeking to offer solutions in the box,” Giroud told L’Equipe du Soir.

According to reports in France, that left Mbappe furious and he had to be talked out of giving a press conference over the matter.

However, Pogba has insisted that the situation has been blown out of proportion.

Who will the Euros this summer? Leave your comments below.

He said: “No, the only tension is on the back and legs!

“There is always a great atmosphere with everyone. Between Olivier and Kylian, there is nothing.

"Or at least there has been nothing in front of me. Maybe what was said was conveyed incorrectly.”

France kick off their Euros against fellow heavyweights Germany next week but preparations could be overshadowed by the events against Bulgaria.

There are certain echoes of 2010 when France pressed the self-destruct button at the South Africa World Cup.

Florent Malouda had to be restrained by Patrice Evra after squaring up to then-manager Raymond Domenech following a training ground incident.

With France tipped as one of the favourites, current boss Didier Deschamps will be hoping for less distractions.