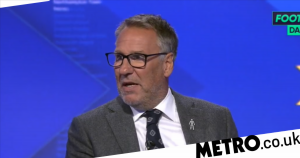 England will bid to win the World Cup for only the second time when the tournament heads to Qatar later in the year.

Arsenal hero Merson believes Marcus Rashford should start for England in Qatar following his revival under new United boss Erik ten Hag, but reckons both Luke Shaw and Jason Sancho should miss out.

‘Gareth Southgate is in a real predicament, isn’t he? He’s got big players, ones he trusts, who can’t get into his team,’ Merson told Sky Sports.

‘It’s alright at the moment and he can get away with it today because there’s another two months to go until the World Cup. But come November, if Harry Maguire is only playing Europa League football, how do you play him in Qatar?

‘That’s the problem with Gareth, he’s very loyal. The reason why he’s picked Maguire along with Luke Shaw in this England squad is because they actually need to play some games – and they’ll play against Italy and Germany.

‘I don’t see Shaw making it to the World Cup, though. He needs to be playing football constantly, every week, and that’s not happening.

‘I don’t see how he gets in for Qatar, especially looking at the number of full-backs we’ve got. That’s a position that we are blessed with.

Merson says Rashford ‘should feel hard done by’ after being omitted from England’s latest squad but understands Sancho’s omission.

He added: ‘I think Marcus Rashford should feel hard done by. If he wasn’t injured, I think he would have got into this squad and I think he’ll get into the final 26-man World Cup squad if he keeps doing what he’s doing.

‘It does depend on what Ivan Toney does in the two Nations League games this month. I think the Brentford man has a chance otherwise there’s no point of him being there in the September squad.

‘I don’t think anyone else will get into the England fold between now and the World Cup. There’s not too many English footballers playing well at the moment. Roy Keane hit it on the head when he said: if you’re not playing for your country, you’re not very good.

‘I can’t think of anyone who’s not playing for England right now who is good, there’s not a lot players left out there.

‘People talk to me about Jadon Sancho, but he’s scored two Premier League goals and got no assists. He’s not ripping it up, and while he scored a good goal against Liverpool he’s in a queue of a lot of players in that position.’