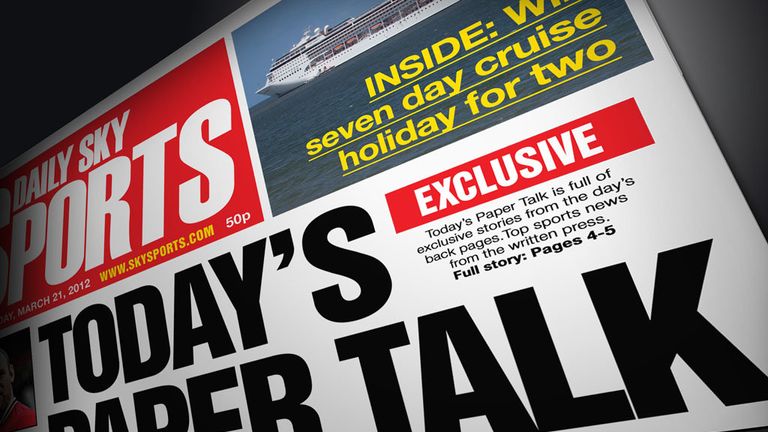 Manchester United fear losing goalkeeper David de Gea to Juventus on a free transfer at the end of his contract.

Chelsea are being lined up for a “partial takeover” by Czech billionaire Petr Kellner, a friend of current Blues owner Roman Abramovich.

Ousmane Dembele was axed from Barcelona’s Champions League squad to face Inter Milan on Wednesday after turning up 25 minutes late for a pre-game meeting.

Gary Cahill could decide to stay at Chelsea in January despite having only appeared once in the Premier League this season.

Chelsea face a fight with Juventus to sign Brescia midfielder Sandro Tonali, an 18-year-old who has been dubbed ‘the new Andrea Pirlo’.

Aaron Tshibola has vowed to fight for his Aston Villa future and is open to returning from a loan spell with Kilmarnock in January to try and impress new boss Dean Smith.

Tottenham are weighing up a move for Burnley goalkeeper Nick Pope as they look for a long-term replacement for Hugo Lloris.

Ashley Young wants a new two-year deal from Manchester United to take him past the age of 35.

Tottenham are set to beat rivals Arsenal to the signing of Atlanta United sensation Miguel Almiron, according to reports in his homeland of Paraguay.

Alexis Sanchez hopes Paris Saint-Germain will offer him a way out of Manchester United in January but fears his lofty wages will cost him the chance of a move.

A group of Manchester United players have refused to carry out sponsorship activities in protest at recent transport issues that have plagued the club.

Sam Vokes is set to commit his long-term future to Burnley with talks over a new deal at Turf Moor now at an advanced stage.

The Football Association wants to raise income from the lucrative football betting market as an alternative grassroots football funding plan after the collapse of the sale of Wembley Stadium to Shahid Khan.

Liverpool have opened talks with Joe Gomez and his representatives over a new contract.

Chelsea are considering a move for PSV Eindhoven striker Hirving Lozano as Maurizio Sarri looks to freshen up his attacking options.

Hibs boss Neil Lennon is not ruling out a January move for Celtic’s Scott Allan.