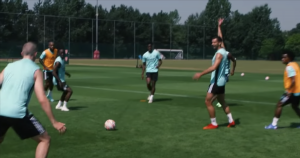 The 21-year-old penned a long-term deal with the Gunners from Anderlecht earlier this week believed to be in the region of £17.2million.

It was straight down to work for the midfielder as he linked up with his new teammates for the first time since securing his switch to the Emirates.

The North London club posted a video of Lokonga getting put through his paces at London Colney as Mikel Arteta's men prepare for the upcoming Premier League season.

And defender Mari did not show any preferential treatment to the new boy. Is Albert Lokonga the holding midfielder Arsenal have been longing for? Comment below

The players were involved in a one-touch passing drill and when Lokonga took two touches of the ball by accident, the Spanish centre-half was quick to call out the Belgium Under-21 international for his mistake

Cedric Soares would then also suffer Mari's wrath for making the exact same error as the 27-year-old's competitive streak was clearly on show during the session.

Arteta is delighted to have Lokonga on board and hopes he can become the holding midfielder Arsenal have been crying out for in recent years.

He said: "Albert is a very intelligent player who has shown great maturity.

"He has been coached well by Vincent Kompany and his team at Anderlecht. I know Vincent very well and he talks so highly about Albert and the positive impact he had on Anderlecht in recent seasons.

"We're confident Albert's ready for the next stage in his development and we're looking forward to welcoming a new member to our squad with his quality and presence."

Arsenal technical director Edu added: "There was a lot of interest in Albert and he was a big target for us.

"He will bring us strength in depth in the centre of midfield."

You can watch the full video of Lokonga's first training session here.