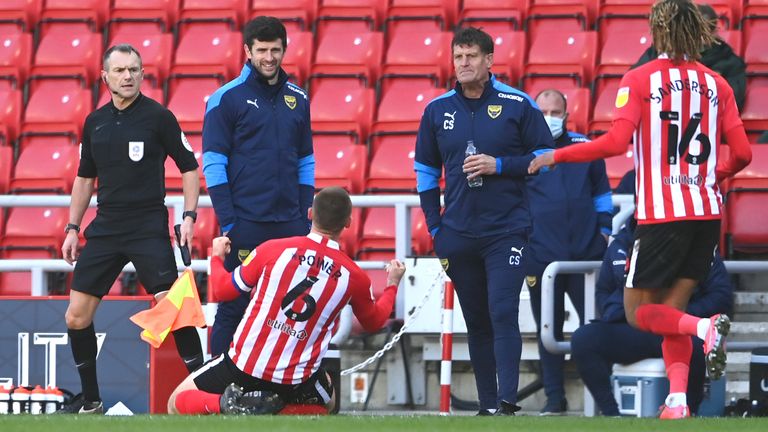 Oxford United and Sunderland have been charged by the FA for their conduct during a bad-tempered League One fixture earlier this month.

Oxford United manager Karl Robinson and Sunderland assistant coach Jamie McAllister have also been handed individual charges by the FA for their behaviour during the Good Friday clash.

In the immediate aftermath of Sunderland’s 3-1 victory, Robinson, who was sent off during the match, had said Oxford would be contacting the police over an alleged “headbutt” on goalkeeper Jack Stevens. However, the following day the club said they would not be proceeding with a complaint to the police, leaving the FA to investigate.

An FA statement said: “Sunderland AFC and Oxford United FC have been charged with a breach of FA Rule E20 following their EFL League One fixture on Friday 2 April 2021.

“Both clubs allegedly failed to ensure that their players and/or club officials conducted themselves in an orderly fashion and/or refrained from provocative behaviour in or around the tunnel area at half time and full time of the fixture.

“It is alleged that the behaviour of the Oxford United FC Manager in or around the tunnel area at full time and the Sunderland AFC coach at half time of the fixture amounted to improper and/or violent conduct.

“They have until Wednesday 28 April to provide their respective responses.”

A fiery 3-1 win for Sunderland allegedly featured incidents in the tunnel at the end of both halves.

“My goalkeeper, he was headbutted at half-time, there was a massive brawl in there.”

Sunderland head coach Lee Johnson said: “Genuinely, I didn’t see what happened at half-time. I was in the toilet, waiting for the boys in the dressing room wondering where everybody was.

“It was probably a good thing because I would have been like Scrappy-Doo in there. Look, it happens all the time, especially in a condensed area. It was handbags a lot of it.

“He’s [Robinson] got to be careful. I’ll tell you that.

“When it comes to the narrative of any argument, there are always two sides to any story. Let me tell you, there was a lot of Oxford staff that didn’t come out of it smelling of roses, let’s just say that.”

April 26, 2021 Soccer Comments Off on Oxford United and Sunderland charged by FA following altercations in League One clash
NFL News