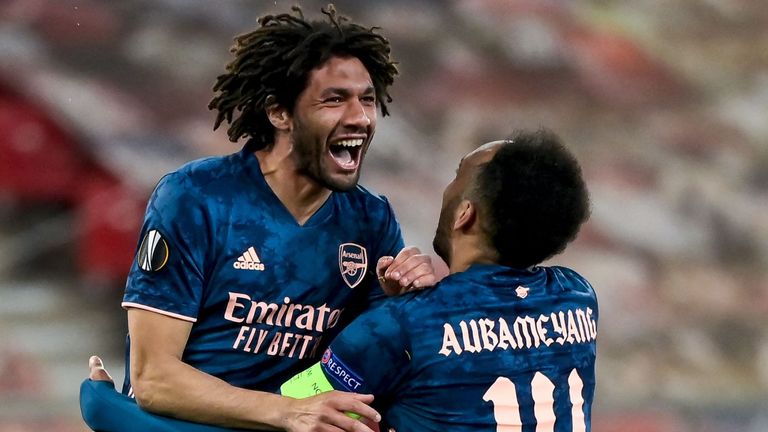 Report as Gabriel and Mohamed Elneny score late to give Arsenal commanding lead in Europa League last-16 tie with Olympiakos, having earlier seen Martin Odegaard’s first goal for the club cancelled out by Youssef El-Arabi 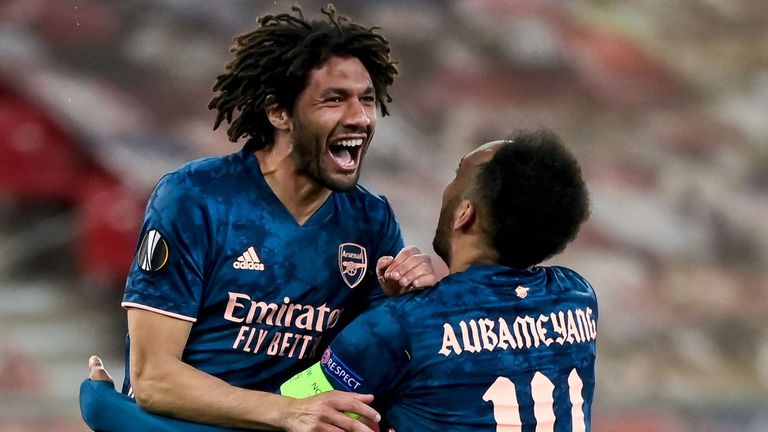 Late goals from Gabriel and Mohamed Elneny spared Arsenal’s blushes from an earlier defensive howler as the Gunners rallied to a 3-1 first-leg lead over Olympiakos in their Europa League last-16 tie.

The Gunners dominated for the most part in Athens, and held a deserved half-time lead through Martin Odegaard’s long-range first goal for the club – although Olympiakos missed a gilt-edged chance to level from a David Luiz error.

They had less mercy on the visitors following another defensive mix-up after half-time, when Dani Ceballos was robbed by Youssef El-Arabi when miss-controlling an ill-conceived pass from Bernd Leno, before the Olympiakos top scorer levelled from distance.

Arsenal, knocked out by these opponents in last year’s Europa League, wobbled from that point but restored their lead 11 minutes from time when Gabriel pounced to power home Willian’s cross, before substitute Elneny fired in a powerful third to give Mikel Arteta’s side a commanding lead ahead of next week’s second leg in north London.

Man of the match: Kieran Tierney

Gunners show character to fight back from familiar errors

Arsenal’s willingness to attack down both flanks posed early problems for Olympiakos, who had no answer as Hector Bellerin and Kieran Tierney doubled up on the wings to good effect, and within three minutes should have been ahead when the Scot’s low ball to an unmarked Odegaard was dragged wide of the far post.

He would soon make up for that error, with a helping hand from Jose Sa, when his rasping drive from distance, with plenty of power but straight at the goalkeeper, was palmed into the corner of the net to give the Real Madrid loanee his first goal in more than a year.

That in itself was some redemption for the midfielder who had earlier gifted Bruma the ball with a blind pass from a throw-in, only for the winger to fire straight at Leno from distance.

And moments before the break they were handed an even more inviting opportunity to score, when Luiz’s awful ball back across his box was picked off by Giorgos Masouras, whose hurried finish from a great position was well off target. 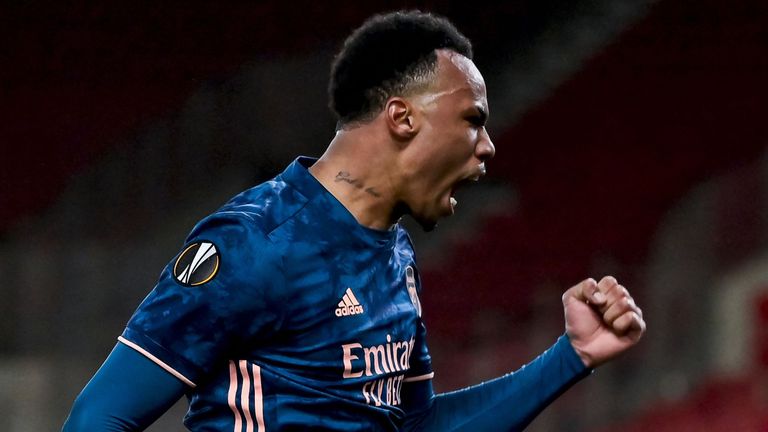 There would be no third let-off for Arsenal 13 minutes after half-time, however, as Leno’s unwanted ball into substitute Ceballos, already under pressure, was snapped up by El-Arabi, who proceeded to beat the out-of-position goalkeeper with a placed curler from distance.

From there, Arsenal threatened to crumble, and could have been behind had El-Arabi picked his spot better from an excellent Lazar Randjelovic pull-back.

Instead, against the momentum of the game, they retook the lead as Gabriel rose powerfully to head Willian’s cross from a short corner back across goal and inside the far post 11 minutes from time.

And they then took a commanding lead with five minutes left from another unlikely source, as Elneny strode forwards before unleashing a powerful low effort which Sa could only touch onto the post and in.

That gave Arsenal a two-goal lead with three away goals – and hope that for opposition from the surroundings of Mount Olympus, who overturned a first-leg deficit to win in north London 13 months ago, lightning will not strike twice at the Emirates Stadium next week.

What the manager said…

Arsenal manager Mikel Arteta: “We started the game really well, very dominant, creating a lot of chances. We should have scored two or three in the first half, but we gave them two chances ourselves.

“After that, we started well again, gave them the goal trying to play out from the back but reacted really well. Overall, there were a lot of positive things, the result, a lot of performances as well, but we have to stop making the errors which are costing goals because you cannot sustain that.”

A week Arteta termed ‘massive’ gets bigger on Sunday when Arsenal host Tottenham in the North London Derby, live on Sky Sports Premier League from 4pm; Kick-off at 4.30pm.