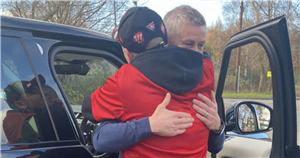 Ole Gunnar Solskjaer has told Manchester United fans that it had been an honour to manage his former club following his dismissal from the role on Sunday morning.

The Norwegian coach was sacked following the damaging 4-1 defeat against Watford on Saturday that left the Red Devils 12 points behind Premier League leaders Chelsea.

The capitulation was also their fifth defeat across seven league outings, and included the dismissal of captain Harry Maguire after a double penalty save from David de Gea.

United offered an emotional statement to confirm the exit of the Old Trafford icon, who had attended their Carrington training base to say his goodbyes.

United fan Luke Sellers posted a snap of himself hugging the outgoing boss on social media, which was shared by Fabrizio Romano and earned praise from fellow supporters.

Solskjaer said: “It’s been an honour to work for Man United."

The 48-year-old got the permanent job following the initial temporary replacement of Jose Mourinho, and earned a new contract in July following their Europa League final defeat.

Who should replace Ole Gunnar Solskjaer at Man Utd? Tell us in the comments section

The statement reads: "Manchester United announces that Ole Gunnar Solskjaer has left his role as manager.

"Ole will always be a legend at Manchester United and it is with regret that we have reached this difficult decision. While the past few weeks have been disappointing, they should not obscure all the work he has done over the past three years to rebuild the foundations for long-term success.

"Ole leaves with our sincerest thanks for his tireless efforts as Manager and our very best wishes for the future. His place in the club’s history will always be secure, not just for his story as a player, but as a great man and a Manager who gave us many great moments.

"He will forever be welcome back at Old Trafford as part of the Manchester United family."

Solskjaer said on Saturday afternoon: "I always have belief in myself but, of course, at the moment it’s a difficult time for us.

"I can trust every single one out there to give what they have, the staff are fantastic but the results at the moment, are difficult, of course. Yeah, I believe we can turn this around."

Before adding: "I understand the fans who’ve supported the club through thick and thin. They’ve been fantastic over the last few years. It’s a difficult period. We’ve had a hard time since Sir Alex left at the club."