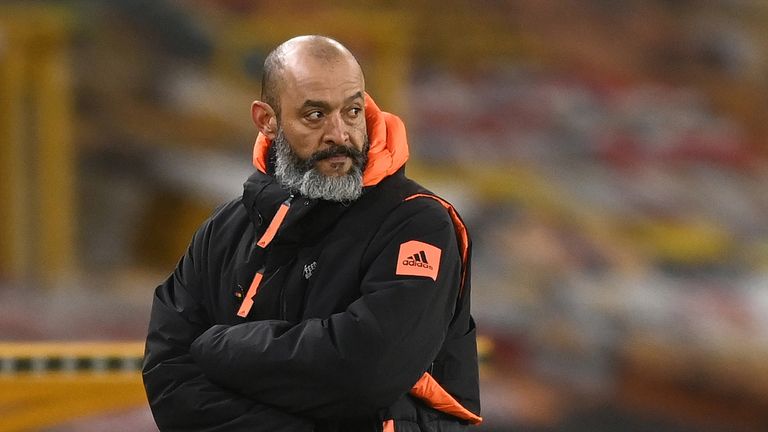 Nuno Espirito Santo insists Wolves must put their injury issues to one side as they look to build on an “important” win at Fulham.

Wolves discovered on Monday Pedro Neto will miss the rest of the season with a knee injury he sustained at Craven Cottage last week.

The Portugal international striker has undergone surgery, as has wing-back Jonny to repair damage to the anterior cruciate and medial collateral ligaments in his right knee.

Nuno will also be without midfielder Ruben Neves against Sheffield United on Saturday night after the midfielder tested positive for coronavirus and must now self-isolate.

“We will chase the why many many times about the injuries,” said Nuno, who is also still waiting for Joao Moutinho and Marcal to recover from groin problems.

“When you look back and start analysing things, there can be one issue, one detail there that you may question, but there are some things that don’t have explanations, so there’s no why to look for. Sometimes it just happens, that’s
football, the game.

“We have to find solutions, we have to compete well, so we trust the squad we have available now.

“This is how we operate, game by game, the good things that we did against Fulham, we must try to repeat, and at the same time there was a lot of mistakes in the game that we must analyse and improve. It was a good game, and important moment for us, that we have to take on from there.

“It’s always been our philosophy since day one, since this beginning, we don’t have to worry about that. The way we work is on a daily basis, we prepare for the game tomorrow against Sheffield United, and they are ready to go.”

The Blades head into the weekend’s round of fixtures bottom of the table and 18 points adrift of safety with seven matches remaining. They could be even further detached by the time they kick-off at Molineux and their inevitable relegation could be confirmed on Saturday night.

“They are a good team – they showed and proved to everybody before,” Nuno added. “I know Chris (Wilder) and Paul (Heckingbottom) too, and one thing is for sure, the character and determination is there, so we can look at Sheffield United and see they’ve had a difficult season, but the character of that group of players is there, so we expect a very tough match.

“We don’t make differences between teams and don’t look at the table. We analyse the opponent, their qualities, and the way we have to approach and play the game. So, there’s no difference in our analysis with the team we’re going to face.”

Wolves vs Sheffield United will be shown live on Sky Sports Premier League and Main Event from 8pm; kick-off 8.15pm. Sky Sports customers can watch in-game clips in the live match blog on the Sky Sports website and app. Highlights will also be published on the Sky Sports digital platforms and the Sky Sports Football YouTube channel shortly after the final whistle.

What more could you want from a Saturday night, eh?

At least we might get to witness a confident Adama Traore playing at full throttle.

We have waited long enough but there have been signs that the electric Spaniard is rediscovering the form of last season. After 1,956 minutes without a Premier League goal or an assist, Traore now has one of each in his last two games. Both contributions – his 70-yard run before setting up Leander Dendoncker against West Ham, and the powerful finish at Fulham – showcased him at his very best. With Pedro Neto unavailable due to injury, Traore is now Wolves’ most likely route to goal in this game against the sorry Blades. The chief goal threat should not be 15/2 with Sky Bet to score the first goal. It must be backed.