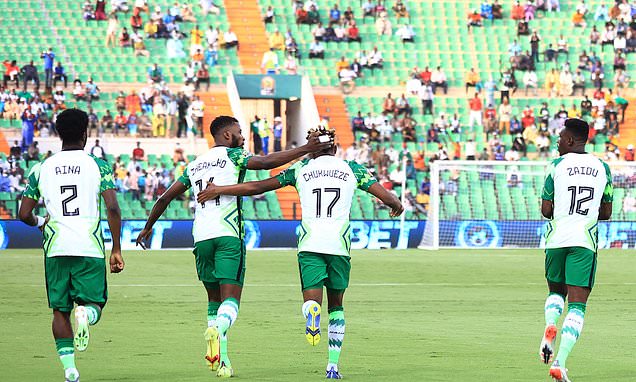 Nigeria impressed in their opening win over Mo Salah’s Egypt and will look to solidify their position at the top of Group D.

Sudan were stubborn in a bore draw against Guinea Bissau to kick off their campaign but know it will be a tougher test today with the Super Eagles carrying momentum into the match.

Troost-Ekong has to make an important interception with Yasin lurking.

Sudan have responded well to going a goal down and are pushing forward.

Yasin shoots wide for Sudan but he was offside anyway.

Sudan are now having a spell of possession as they look to regroup after that early goal.

Nigeria have the lead after just three minutes and are on track to progress to the knockout stages.

It’s an early goal for Nigeria, with Chukwueze steering the ball home from close range.

Nigeria have started brightly as they look to cause problems for the Sudan defence.

The game is underway.

Nigeria have an excellent opportunity to progress to the knockout stages and they will be confident of securing victory against Sudan today.

Sudan won the Africa Cup of Nations in 1970, but this is their first involvement in the competition since 2012.

Kelechi Iheanacho was on the scoresheet for Nigeria against Egypt, and the Leicester striker could have a major part to play again today. His club team-mate Wilfred Ndidi is also in action.

Nigeria secured a 1-0 win against Egypt in their opening group game, while Sudan drew 0-0 against Guinea-Bissau.

Good afternoon and welcome to our live coverage of Nigeria v Sudan as the Africa Cup of Nations continues.