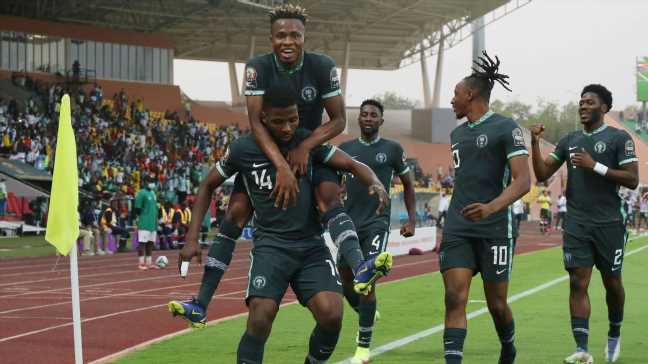 Itinerant writer. Engineer in a previous incarnation. One time Black Belt. Lover of football, flirter with other sports.

If thriving in chaos were a team, it would be Nigeria.

Until the day before their opening game against Egypt, there was dejection and apathy about the national team’s chances at the Africa Cup of Nations. Not only had the team been playing tamely, despite their results and securing qualification for both AFCON and the World Cup playoff round, doubts persisted about their chances of even getting out of the group.

Twenty-four hours later, the gloom has lifted, the apathy is gone, and there is a fresh breath of belief and optimism from fans after an imperious 1-0 deconstruction of seven-time champions Egypt in Garoua.

Kelechi Iheanacho ripped home a world-class strike on the half-hour mark, and the Super Eagles survived a late siege to emerge with all three points from their opening game of the tournament. In fairness, the scoreline flattered the Pharaohs. It could easily have been at least four.

– Everything you need to know about the Africa Cup of Nations
– ESPN+ viewers’ guide: LaLiga, Bundesliga, MLS, FA Cup, more

But, more than the result, it was the way the Super Eagles bossed the Mohamed Salah-led Pharaohs around the pitch for the better part of 90 minutes that had the fans buzzing and believing again.

Super Eagles interim coach Augustine Eguavoen said the performance came down to a change in style.

“Every coach has their style, philosophy and leadership,” he said after the game. “We wanted to play the attacking football that is our identity. I told the players to see me as their brother and father. We have a path towards the same direction, we have the privilege to serve the country, and we must always give our best.”

That effort was exactly what the fans had been asking the players to show over the past year or two.

Social media erupted with praise for the team not seen since their qualification for the World Cup in 2018. And there were many Nigerian fans who have now instantly installed he Super Eagles as favorite to win the whole thing. Perhaps a little too early.

“Well done boys, that is how we do it,” former captain Nwankwo Kanu said on Instagram. “One is gone, the game is coming. That is how we are going to do it, the same way and then winning winning. The Cup is coming back.”

None of that looked likely going into Tuesday’s clash.

Beset by litany of troubles in the buildup to the Africa Cup of Nations — not the least of which was the sacking of coach Gernot Rohr — there are many who would have forgiven the West Africans had they rolled over for one of the continent’s best sides in their opening game of the AFCON.

And certainly not Eguavoen, who clearly expressed that sentiment within days of being appointed to fill the role left by the dismissed Rohr.

“The time is quite short, we all know that. But we are Nigerians and once you get to a tournament, everybody expects you to win,” he said.

“Nobody cares what happened before. From the blast of the whistle, nobody wants to hear excuses, but with the quality of players we have, I don’t think we will struggle.”

On Tuesday against Egypt, they most certainly did not. If anything, they were imperious in their dominance of the seven-time champions.

An outsider watching the game and advised that one of the two teams playing had its coach fired two weeks prior to the tournament, had lost four starting players to injuries and a replacement to a club baring fangs, and with barely one week of training under their belt, would have been forgiven for thinking it was the team in red.

Throw in the minor detail that Egypt had the same coach for the past four months, and have recently returned from playing in the Arab Cup, where the bulk of the same players participated under the guidance of the same coach and finished fourth.

But Eguavoen came with a particular advantage. He understood the terrain, having navigated it twice. First as an assistant in 2004 under Christian Chukwu, and then on his own in 2006. On both occasions, he came away with a bronze medal.

That experience was bound to count for something, and it did. In preparing for Egypt, Eguavoen had to keep an equally laser-sharp focus on his own team.

Rohr was fired despite qualifying the team for the AFCON, and securing a place in the 2022 World Cup playoffs.

Rohr’s major “sin” was that the team had failed to pass the eye test of playing good football. Eguavoen’s major task, then, was to get the team playing the kind of football the fans would love.

For the first time since the 2018 World Cup qualifying series, the Super Eagles played with tempo, with energy, with vigor. They closed down spaces, they won second balls, and they used the width of the pitch to the full, especially with Moses Simon out on the left.

They Pharaohs could not live with them.

Salah, Africa’s best player, was smothered and had only one real opportunity for a goal, a triumph of tactics over quality.

“Salah is one of the best players in the world,” Eguavoen said. “The strategy wasn’t a specific marker, but we instructed the players to close him down at any time and there must be a second player behind the marker.”

Eguavoen answered all the questions Rohr’s critics asked of the German. His team played with energy, his tactics were spot on, and he made his substitutions in the nick of time.

If there were any criticism of the Nigerians’ play, it would be that the level dropped off after the substitutions — with forward Sadiq Umar, who replaced Taiwo Awoniyi, unable to hold up the ball, and Chidera Ejuke missing chances to kill the game off. Eguavoen was unfazed.

“We know the strength of our players, we know Ejuke is good from the left side, but it was impossible to substitute Simon [so we put Ejuke on the right],” he said.

“It was a tactical change and Ejuke had chances to finish the game. For Umar, maybe first time nerves in such a big stage, he gave me some excuses after the game and we will talk to him later.”

All told, this was not just a good day at the office for the Super Eagles, but a great day for Nigerians at home. It may have been just one game, but sometimes, that is all it takes to turn the tide.