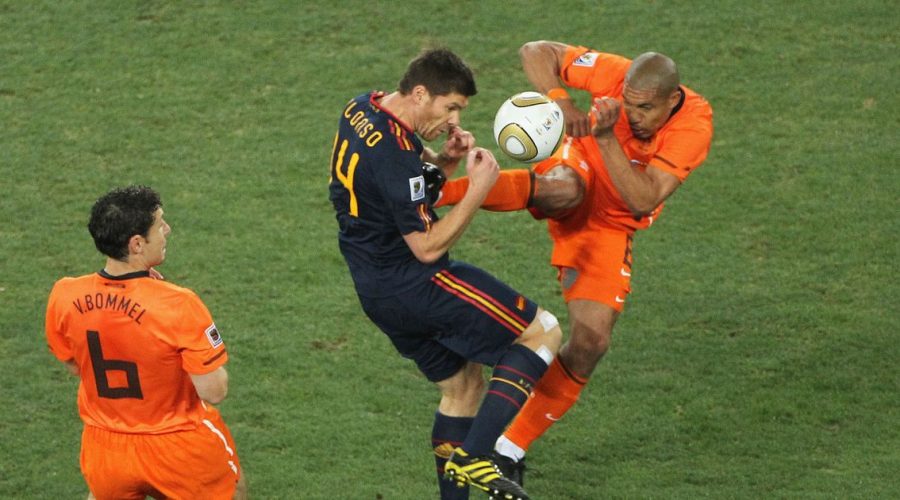 Nigel de Jong has admitted he wants to have a beer with Xabi Alonso to smooth things over.

The Dutchman delivered an infamous kung-fu style tackle on the Spaniard in the 2010 World Cup Final.

Spain eventually defeated the Netherlands 1-0 after extra time in Johannesburg – but 30 minutes in, the former Manchester City midfielder made the lunge.

The kick only resulted in a yellow card from English referee Howard Webb – much to the bewilderment of those watching at home and at the stadium in South Africa.

De Jong told FourFourTwo he only had eyes for the ball, and he caught Alonso, the current Bayer Leverkusen head coach, by accident.

He said: “I just wanted to play the ball – that was my only focus. I didn’t see Alonso coming because he was on my blind side. I didn’t expect to get sent off at the time because I felt it was obviously an unfortunate incident.

“I was lucky that an English referee was in charge, because he’d seen many hard challenges in the past. I thought he would give me the benefit of the doubt because I put my hands up immediately.”

De Jong said in the interview that he had never talked about the challenge with Alonso but says he would be happy to have a beer with the former Liverpool maestro to talk things over.

“We’ve seen each other but we’ve never spoken about that moment – it’s just a moment in football history. We play a contact sport and sometimes you will get a red for a lesser challenge.

“That incident came on the world stage so it gained a lot of attention. Maybe one day we'll see each other, have a beer and laugh about it. Ultimately, he won the game. I think he had the last laugh.”