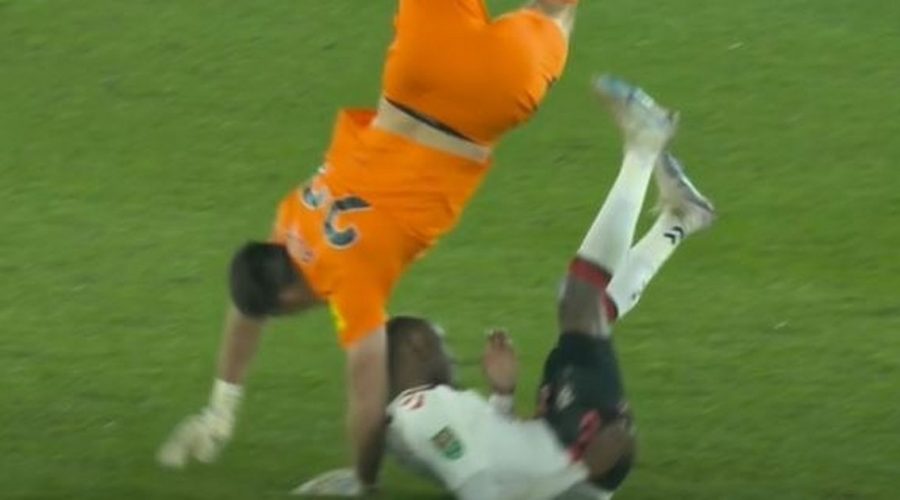 Fans have been left stunned by Nick Pope’s horror challenge on Moussa Djenepo which they dubbed ‘fit for the NFL’.

The Newcastle United goalkeeper completely wiped out the oncoming Southampton forward during the first half of their Carabao Cup semi-final first leg on Tuesday.

Djenepo ran towards the Newcastle box before being met by the 6ft 6in Englishman. Pope rushed out of his area to successfully head the ball away, but clattered the Malian with his body in the process.

Djenepo, 24, was sent tumbling to the ground after feeling the full force of the Toon star. Pope also landed awkwardly as they both crashed to the turf.

The Southampton man was clearly in discomfort as Saints medical staff rushed on to treat him. And after several minutes of receiving attention, Djenepo was deemed unable to continue and replaced by Adam Armstrong as a concussion substitute.

Do you think Nick Pope should have been sent off? Let us know in the comments section.

He was fortunately able to walk down the tunnel unassisted, however. But referee Stuart Attwell only awarded Southampton a free-kick while Pope escaped further punishment, leaving fans on social media baffled.

One Twitter user wrote: "Nick Pope just nearly killed someone,” while another referenced the NFL tweeting: "Nick Pope playing the wrong football with that tackle."

A third added: "What was Nick Pope doing there lol? Absolutely flattened Djenepo,” while a fourth pointed out: “Nick Pope shouldn’t be on the pitch, disgusting challenge.”

And another argued: “Nick Pope should be sent off. That’s dangerous play!”

Newcastle went on to win the first leg 1-0 against the 10-men Saints thanks to a tap-in from Joelinton in the second half.