Preparing for French top flight matches has become such a relaxed affair for Paris Saint-Germain, even Neymar is using the mid-week build up to practise his party tricks.

PSG have won all 10 of their French top flight matches so far this term, but face a big test when they travel to fourth placed Marseille on Sunday.

Not that Neymar seemed particularly concerned over a trip to the south of France though. 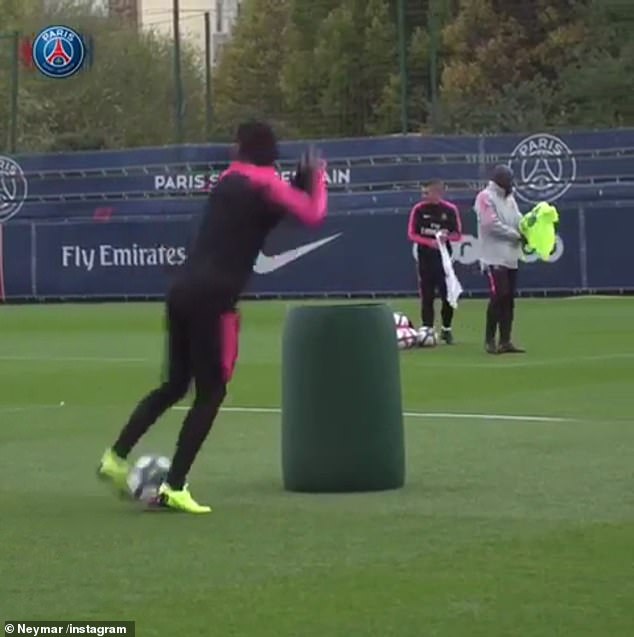 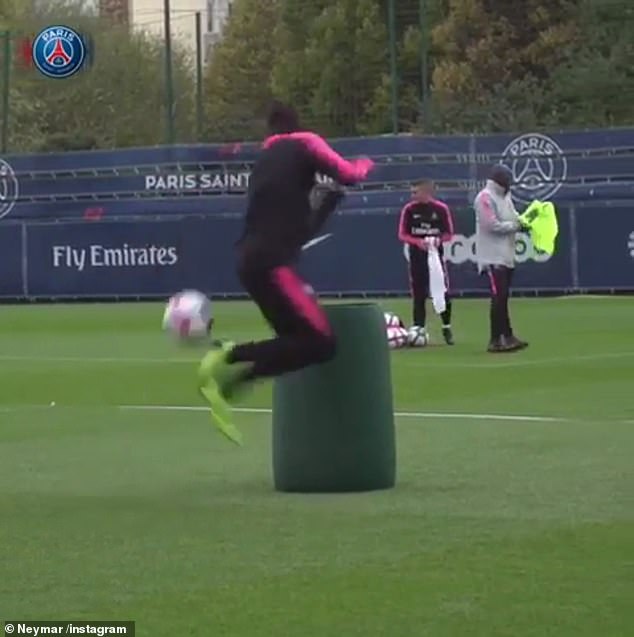 He used training time as an opportunity to show off his impressive skill by flicking balls into a bin – before making sure a watching camera caught the move and his small celebration afterward.

Meanwhile, Thomas Tuchel is convinced Kylian Mbappe has room to improve at PSG.

France striker Mbappe has scored nine goals in six league appearances this season ahead of Sunday’s Le Classique at the Stade Velodrome. 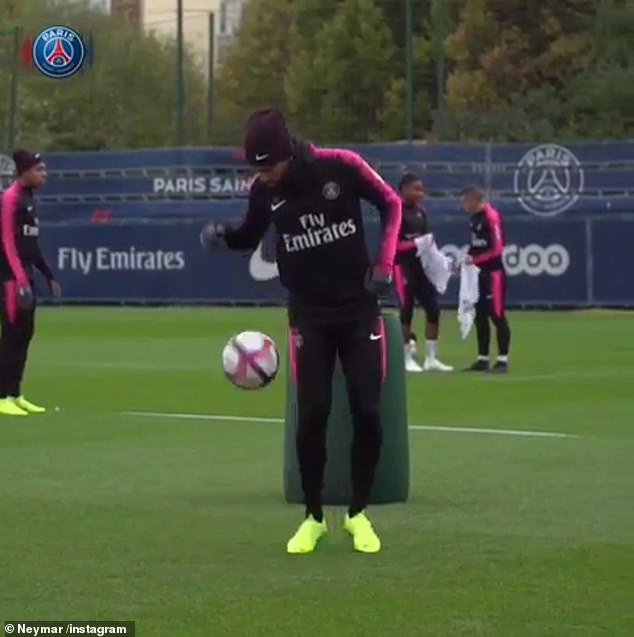 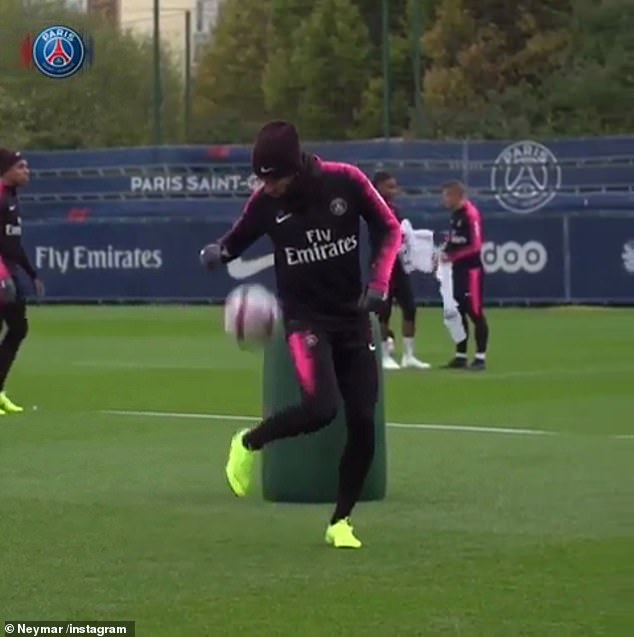 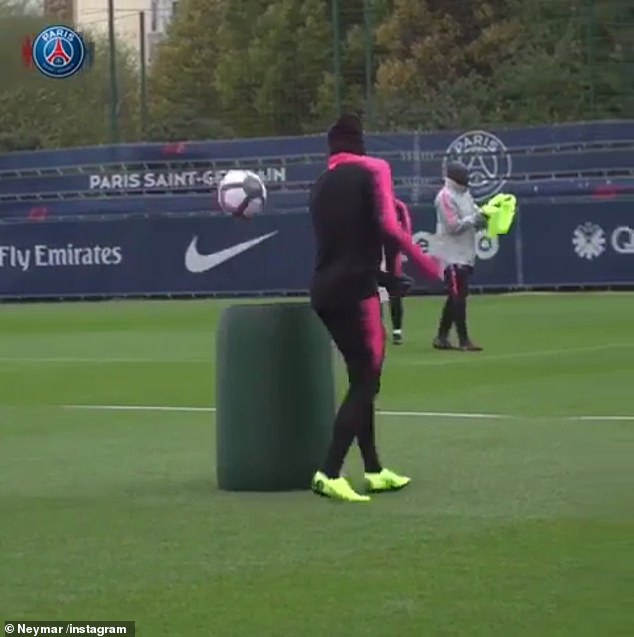 After performing the move, the forward quickly glances behind to see the ball land in the bin 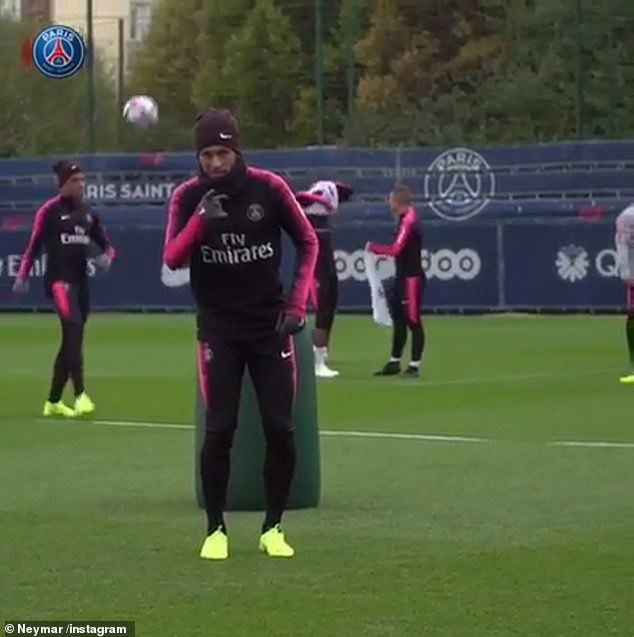 But the 19-year-old had a rare off night on Wednesday when PSG had to rely on Angel Di Maria’s stunning stoppage-time strike to secure a 2-2 Champions League draw against Napoli.

‘We are playing a lot of matches and playing is the best way for a player to keep improving and progressing,’ Tuchel said of Mbappe.

‘Kylian has already achieved so much, but he also has room for improvement.

‘Great players want to play every game and need these big matches to show what they can do. 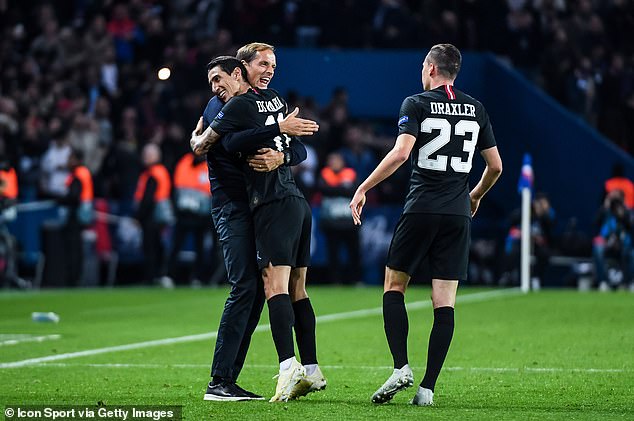 ‘He has already shown he can adapt and learn quickly, he has a lot of quality, but everyone can always improve.’

PSG, who came into the weekend with an eight-point lead over second-placed Lille, will equal a long-standing European record if they make it 11 wins from 11 at Marseille.

Bill Nicholson’s great Tottenham side of the early 1960s registered 11 consecutive wins at the start of the 1960-61 English season, a best in Europe’s top five leagues.

‘I am very excited and can’t wait for the match,’ Tuchel said.

‘It’s an extraordinary match to play, in a great stadium, and we know matches between Paris and Marseille are never easy.

‘Marseille’s results since the start of the season are not so important this weekend. This is the type of match when anything can happen.

‘They will be playing at home and have the chance to stop our record run of wins.

‘We know they will be extra motivated and that they will do everything to beat us.’ 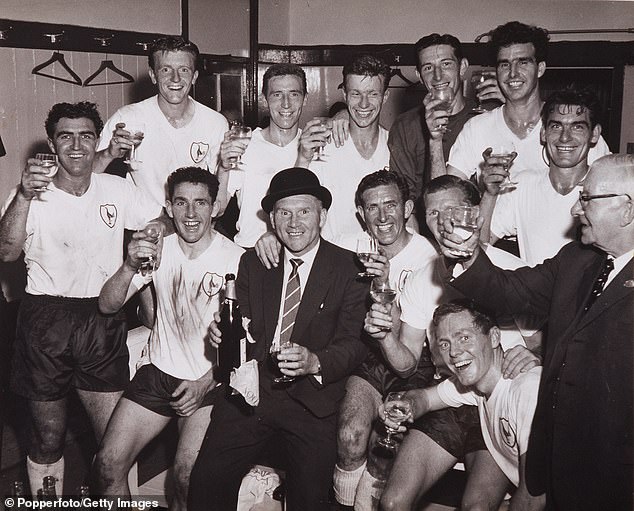 October 27, 2018 Soccer Comments Off on Neymar shows off impressive skill ahead of PSG trip to Marseille
NFL News