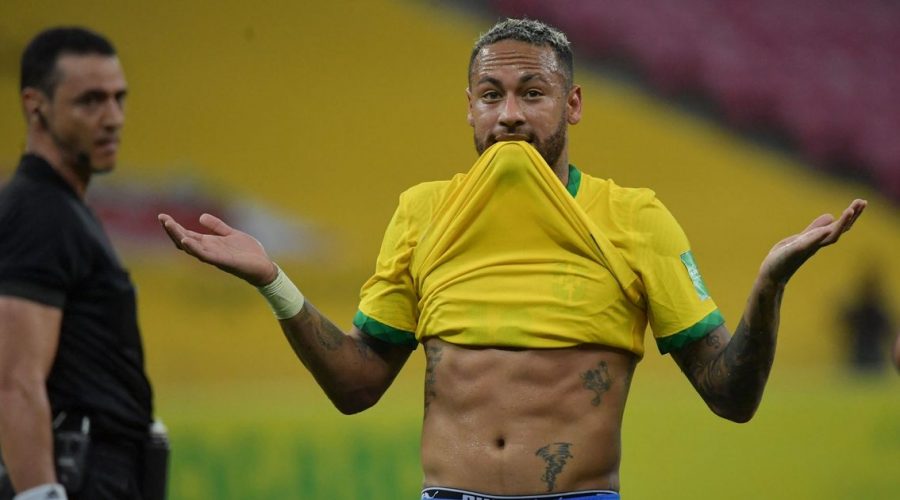 Neymar hit back at accusations he has gained weight by flaunting his washboard abs after scoring in Brazil's 2-0 win over Peru.

The Paris Saint-Germain ace responded to the claims on Instagram and in a TV interview after the match.

Speaking at the conclusion of the game, Neymar did not want to reflect upon his performance, choosing instead to tackle the allegations about his weight.

The 29-year-old became Brazil's all-time leading scorer in World Cup qualifying games with his first half strike against Peru his 69th international goal in just 113 caps.

Neymar's strike saw him overtake Zico and Romario on 12 goals in qualification matches, while his early assist for Everton Ribeiro to score the opening goal in Recife made it 51 assists for the national team.

But rather than reflect on those achievements, Neymar hit out at claims about his weight after snaps emerged of him topless during the international break which led to suggestions he had put on a few pounds.

After the match, he posted a photo on Twitter of his abs with the caption: "Chubby good ball."

He also hit out at critics in a TV interview: "I don't know what else I have to do to make people respect me", Neymar said.

What do you make of Neymar's response? Let us know in the comments section.

"This has become something normal and has happened for a long time.

"They are journalists, commentators and others. That is why, sometimes, I don't even like giving interviews anymore.

"I think that an important moment has come for it me to say this, because I am suffering all kinds of disrespect."

That led to Brazilian TV’s Galvao Bueno responding, in quotes carried by Marca: "Why? Why do you say they persecute you all the time? They criticise when they criticise and praise when the praise is deserved.

"I see a certain exaggeration on the part of Neymar. That is my opinion; focus is lost a lot. Now, if he feels like this, he is the one who suffers.

"Calm down, Neymar. Calm down. That's what Neymar lacks. Calm. You don't see Messi doing those things. Neymar still lacks that self-control, because Messi is criticised as much as he is."

September 10, 2021 Soccer Comments Off on Neymar flaunts washboard abs as Brazil star hits out at lack of respect
NFL News