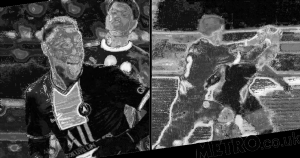 The pair first clashed back in September when the Brazilian superstar was sent-off for slapping the Spanish defender in the back of the head.

Making his return after a month out of action as a second-half substitute, Neymar helped secure the first silverware of new manager Mauricio Pochettino’s reign with the decisive goal in a 2-1 win.

After the game, Neymar tagged his rival, whom he accused of racism following the initial incident, in a post celebrating PSG’s victory.

Gonzalez, who avoided additional punishment from the French Federation following an investigation after the original spat, responded, replying: ‘My parents always taught me to take out the trash. Go OM always.’

Pochettino, meanwhile, who failed to win a trophy with Spurs, was delighted to get his tenure off to the best possible start, but was quick to praise the work of his predecessor Thomas Tuchel.

‘After ten days as a coach, three matches played and this final against our biggest rival, it’s very important to win,’ Pochettino told Canal+.

‘More than the trophy, it is honour and pride that are most important for the club and for the fans. Little by little, the team is doing the things that I ask for. I’ve been here for two weeks and we’ve done a lot of preparation.

‘This is only the beginning. We believe that with time and work, we can install our ideas and that the progress will be good because the quality we have.

‘We have little time to train but my players deserve this trophy, the recognition and they have adapted quickly to my requirements.

He said: ‘I want to thank the players, [Leonardo] and Nasser [El-Khelaifi] for the opportunity, but also Thomas Tuchel and his staff because we are here because they have won titles.’