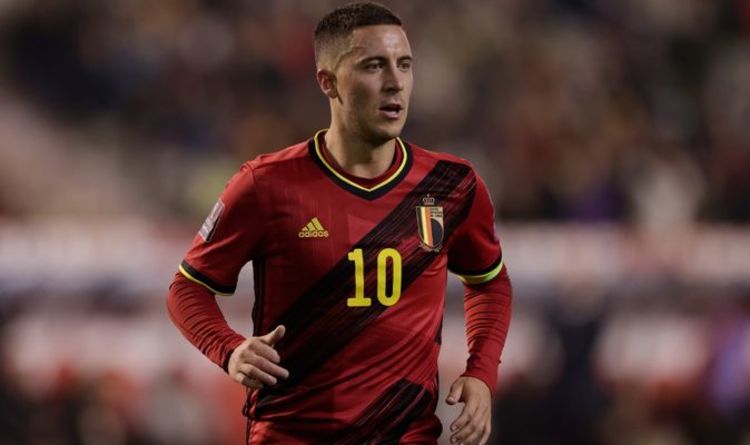 Eden Hazard’s move to Real Madrid sparked all sorts of sensation in the Spanish capital, with fans around the world excited to see just what the Belgian superstar could do after seven stellar years at Chelsea. Yet, for various reasons, a move hasn’t worked out. But team-mate Thibaut Courtois believes there is time left for Hazard to make his mark under Carlo Ancelotti, despite links to Newcastle.

Hazard has had a nightmare spell in Madrid, scoring just five goals and making just 54 appearances in two-and-a-half-seasons.

Currently behind Vinicius Junior, Rodrygo, Marco Asensio in the pecking order for a wing spot, Hazard is in need of a fresh career boost.

Newcastle have been credited with an interest in the Belgian in the past.

However, Eddie Howe will have to rely on the riches of Newcastle’s new owners to help pry Hazard away given their precarious position in the table.

And ex-Chelsea and current Real Madrid teammate Courtois believes the winger still has a future at Los Blancos.

“I have known Eden for a long time and know that his dream was to play for Real Madrid,” Courtois told Reuters.

“It’s a shame it hasn’t worked out yet as everyone would like it to.

“I can see that he has got the desire, joy and he wants to help the team.

“He is looking to improve. It’s not easy to take back your best form when you haven’t played for the last two and a half years.

“He has showed in his entire career he is one of the best players in the world. He hasn’t been able to show it lately, but that talent is not gone and I am sure he will get back.

“We cannot kill him believing he is an average player because he is not.”

The Magpies are currently the only team in the English Football League to not have won a game this season.

With just six points from 12 games, they will need investment over the winter window if they are to progress.

Manager Howe is set to lead his team out for the first time since his appointment on Saturday.

And the ex-Bournemouth man will be able to see just where the problems lie for his side – something Hazard may be able to fix if he was to make the move to Tyneside.