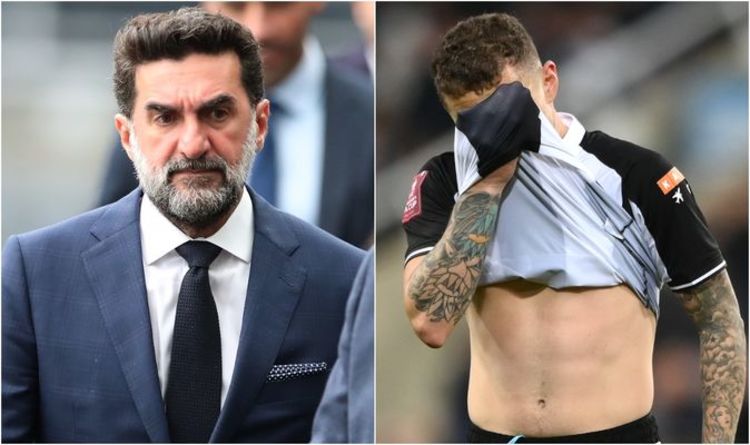 Newcastle United’s squad were paid a surprise visit by club chairman Yasir Al-Rumayyan soon after their shock FA Cup defeat to Cambridge United on Saturday afternoon. The Magpies were left embarrassed as the League One side dumped them out of the cup at the third round stage.

Eddie Howe’s side could not muster a win against their supposedly over-matched opposition, despite notching 23 shots during the game.

Cambridge only produced seven in response, but one of them proved to be a crucial strike by Joe Ironside on the way to a 1-0 victory.

The travelling fans were in raptures when the goal went in, when VAR approved it and when the final whistle confirmed their passage to the fourth round.

Newcastle players, meanwhile, were left dejected at another poor display in front of their home fans.

JUST IN: FA Cup fourth round draw: Every team through to round four and their ball numbers

New signing Kieran Trippier was among them, and the former Atletico Madrid man’s first 90 minutes in black and white proved to be one to forget.

After the game, Al-Rumayyan and his bodyguards paid the players a visit in the dressing room.

There were several unusual aspects to the visit – one being the visit of a figure as senior as a chairman in itself, and the other being how soon after the final whistle it came.

The Saudi Public Investment Fund, who acquired a controlling stake in the club in October, have big ambitions for the Toon, which has been backed up by early January investment.

But with the team struggling in the Premier League and crashing out of the FA Cup, Al-Rumayyan clearly felt as though it was the right time to intervene.

After the game, Howe claimed: “I personally wasn’t in there for that [the visit]. Then they saw me with my coaching team after.

“I believe they were very supportive to the players, highlighting the fact we’re very much in this fight to stay in the league together, and they’re very much behind everybody.

“I can’t thank them enough for that support.

“I think it was really beneficial for the players to be able to see that and hear that because this journey we’re going on currently and this fight we’re in to stay in this division is a united effort from everybody at the club.”

Indeed, most players in the squad are under pressure to perform given that the Magpies are linked to a host of new recruits this month.

The club’s centre-backs may feel most at risk, with Newcastle seemingly pushing hard to land either Sven Botman or Diego Carlos, despite being met with resistance.

Attacking reinforcements are also believed to be on the priority list, with Callum Wilson due for a spell on the side-lines.