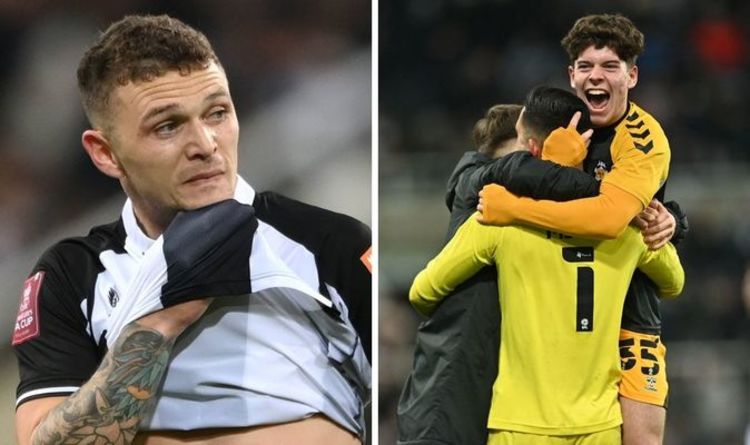 Thomas Tuchel on the 'Magic' of the FA Cup

Kieran Trippier was ignored by a number of his new Newcastle team-mates when he urged them to applaud the home crowd after this afternoon’s embarrassing 1-0 home defeat to Cambridge. Close to 50,000 Magpies packed themselves into St James’ Park to welcome their new £12million signing but it turned out to be an afternoon to forget for Trippier and Eddie Howe’s side.

The Newcastle boss named a full-strength XI as he looked to build some momentum ahead of next week’s crunch relegation showdown with Watford.

But the team struggled to break down the organised League One side, who defended excellently.

U’s forward Joe Ironside – who grew up on the St James’ Park terraces watching hero Alan Shearer – struck what proved to be the winner just before the hour mark.

Cambridge thought they had doubled their lead in the second half too before VAR saved Newcastle’s blushes.

But the underdogs held on to inflict Newcastle’s worst-ever defeat in the FA Cup as pressure continues to mount on Howe.

According to Newcastle reporter Ciaran Kelly, Trippier was keen for his team-mates to applaud the home crowd at full-time.

However, despite being called by the right-back, a number of players walked off straight down the tunnel.

It’s a bitter pill for Newcastle’s supporters to swallow, particularly as they continue to stick by the team through thick and through thin.

The completion of the £305million Saudi-backed takeover was supposed to be Newcastle’s ticket to trophies and Europe.

Yet this was a sobering reminder of just how far the Magpies have to go before they can even consider achievements of those nature.

Newcastle’s substitutes are said to have stayed out on the pitch with Howe and his staff to applaud the fans.

The 4,000 Cambridge supporters that travelled north to St James’ Park taunted the home crowd with chants of “Cheerio. Cheerio. Cheerio,” in the dying embers.

Trippier had spoken about his desire to change the mentality of this squad following his unveiling on Friday.

The England international was part of an Atletico Madrid side that shook off Real Madrid and Barcelona last season to win the La Liga title.

While Atletico have flattered to deceive this term, Newcastle’s shocking defeat to Cambridge is likely to create alarm bells for Trippier.

It’s an indication of the size of the task at hand and the result could potentially harm Newcastle’s chances of landing more top-class talent this month in the January transfer window.