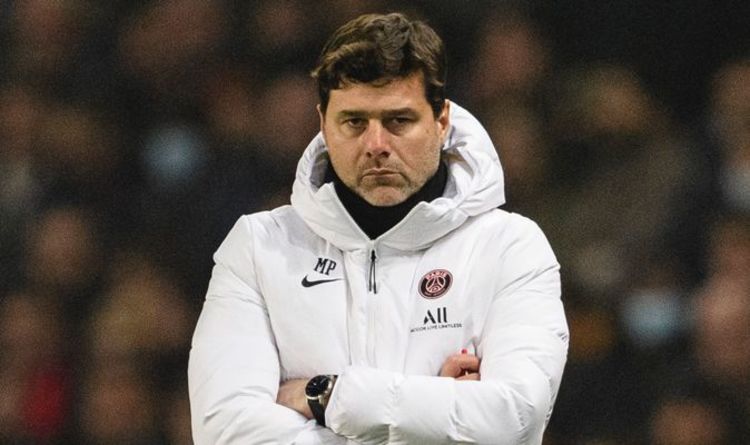 Manchester United’s reasoning for wanting an interim boss to take charge until the end of the season has become clearer after Zinedine Zidane’s preference was uncovered. Paris Saint Germain boss Mauricio Pochettino is the favourite to replace Ole Gunnar Solskjaer in the long term but United might not be able to appoint him until the summer.

The Red Devils ended Solskjaer’s three-year spell after it became clear that the club legend would not be able to turn around the club’s poor form.

Despite being given the confidence of the Old Trafford hierarchy after heavy defeats against Leicester City, Liverpool and Manchester City, the Norwegian was dismissed after last weekend’s 4-1 thrashing by lowly Watford.

United have already been linked with several bosses. Former Tottenham boss Pochettino appears to be the main candidate.

Pochettino has long been a target of United’s but has not been available whenever they have been looking for a new manager. When Jose Mourinho was sacked in December 2018, the Argentine was still in charge in north London.

When Pochettino was dismissed by Spurs a year later, Solskjaer was embarking on a positive run at Old Trafford.

But the PSG boss might still be difficult to attain despite reports that he would be willing to depart the French capital, according to French football journalist Sara Menai.

The Ligue 1 leaders would want a permanent replacement but could miss out on former Real Madrid head coach Zidane, who supposedly favours replacing France manager Didier Deschamps after the 2022 World Cup.

“Zidane is the Qatari’s dream at PSG we know that. If he arrived mid-season, I don’t think anyone at PSG would be too upset if Pochettino leaves and Zidane replaces him,” Menai said.

“But the situation is far more complicated.”

She added: “The door seems very closed though at the moment with Zidane. He is waiting to replace Deschamps as manager of France after the World Cup.

“It doesn’t seem he wants to take any club. He has never opened the door to any club.”

As such United midfielder Carrick remains in caretaker charge until a new interim boss is found. United will then look to replace that manager with Pochettino in the summer.

Carrick won his first game in charge, the Champions League group stage win over Villarreal, and will lead the Red Devils against Chelsea this Sunday.

However, he has insisted that Tuesday’s 2-0 success in Spain was of no personal importance.

“It’s not an important result for me personally. It’s an important one for the players and the club,” Carrick told BT Sport.

“It’s an important result for the players, tonight is not about me by any stretch.

“It’s obviously been an emotional few days. The first person I spoke to after Ed [Woodward] asked me to do this role was Ole, to almost see what he thought about it because I felt that was the right thing to do.

“I have a responsibility to be here managing the team and I take great pride in that. It wasn’t about me tonight though, it was about getting through [the group].

“It was a massive game, when you get to this stage in the Champions League it can swing so easily both ways, so it was vital we came here and got the right result and we managed to do that so I’m delighted.”
Source: Read Full Article