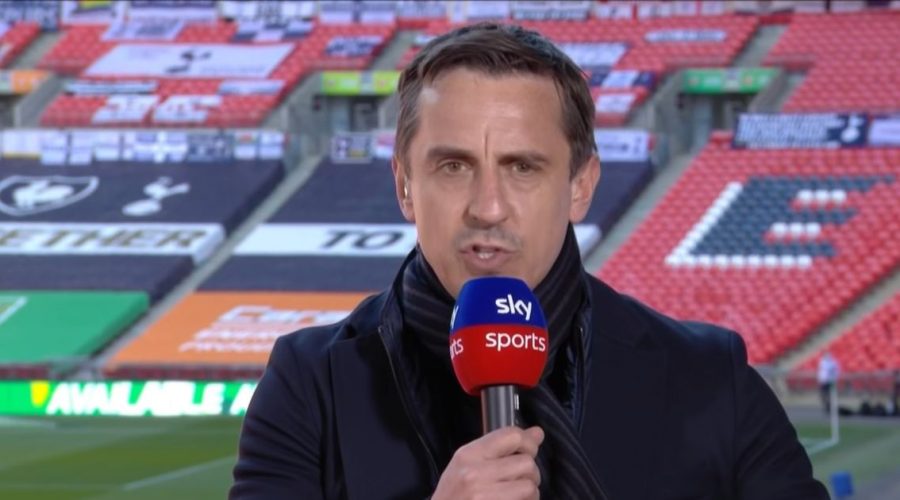 Gary Neville has slammed Tottenham’s struggling players and the state that Jose Mourinho has left the club in.

Spurs were defeated in their latest attempt to win a first major trophy since 2008, with Manchester City utterly dominant in Sunday’s Carabao Cup final.

The Londoners had just two shots compared to City’s 21, with most of the match taking place in the Tottenham half.

Mourinho was sacked as manager by Spurs last Monday after an underwhelming campaign that left many Spurs players at odds with their boss.

The change in the dugout, with Ryan Mason named interim boss until the end of the season, appeared to have little positive affect at Wembley.

Mourinho had taken over from Mauricio Pochettino 18 months ago, turning Spurs into a team with a more defensive outlook.

That was again the case on Sunday, with Neville laying into Mason’s men for their performance.

“Tottenham were quite passive for the whole game. Spurs have got some fantastic players, and I expected a little bit more from them,” he told Sky Sports.

“They've obviously lost their manager this week and it's been an incredibly difficult week for most clubs who have been dealing with this issue of the European Super League.

“We don't know what impact that has had. Losing their manager, playing against an incredible team, all those things are factors.”

Neville also appeared to criticise the effect of Mourinho’s tactics on Spurs, with Mason’s men only able to mount a handful of attacks against City.

“Mauricio Pochettino was a great coach for many of these players,” he said.

“They've just lost that ability to understand how to play with each other, they look like a team who are now reacting to what the other team do, rather than having their own idea.

“When I used to watch Spurs under Pochettino, I always thought that there was a plan, an idea and they've gone on to become a group of players who don't have an idea at this moment in time.”