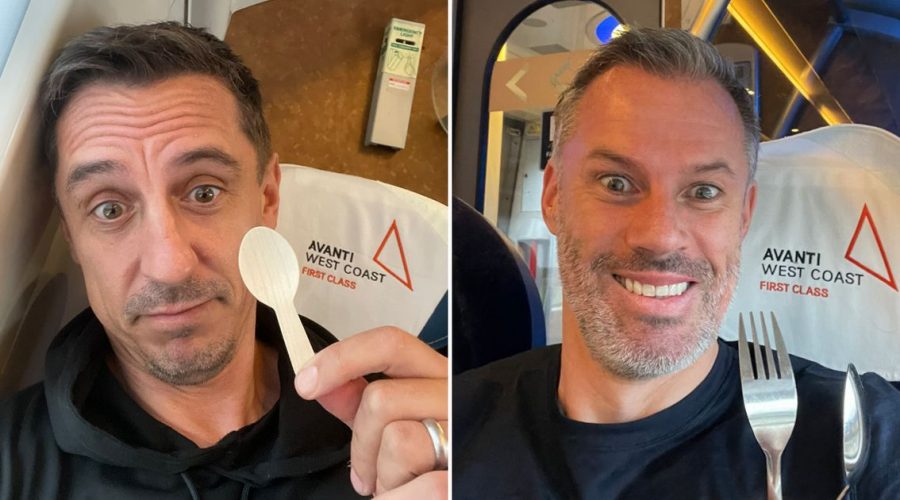 Gary Neville and Jamie Carragher became embroiled in a tense exchange of words on Twitter after the former called out figures in Liverpool for "selling out".

The Monday Night football presenters appeared to veer over the lines of friendly banter and genuine fury during an exchange concerning Neville’s service from Avanti West Coast train services.

It all kicked off when Carragher replied to Neville’s tweet, where he had publicly bemoaned the service of the train operator who were apparently unable to supply the former Valencia manager with metal cutlery.

The former Liverpool defender responded with a sarcastic selfie on Monday, holding a metal fork in front of the company’s first-class logo in the background while he was on his own journey.

"Absolute shambles of a company. Morning everyone…”

However, the former Manchester United captain did not take exception to Carragher’s selfie and proceeded to go for the former Liverpool defender.

Which club will finish higher this season, Neville's Man United or Carragher's Liverpool? Comment below.

“You lot sold out to beat tiered lockdowns, won all the pilot events post CV, and now you’re celebrating a private contract partner of a Tory government," he hit back.

"You write for the Telegraph, drink red wine, and stay in. a 5-star hotel in Whitehall. Mr James Carragher Ladies and Gentlemen!”

It was a stunning cranking up of the heat between the two former players.

The former Red, who won 38 caps for England during his illustrious career, snapped back just as hard.

“The Roman Abramovich of League 2, who wants an independent regulator to regulate the Glazers but not the class of 92, used his testimonial money to build a hotel for the fans (they still have to pay & Sat (Saturday) was his biggest taking" he tweeted.

"Let’s analyse that bit of Ronaldo on MNF!"

It will be an interesting atmosphere between the two when they watch Everton host Burnley at Goodison Park.

If any knives are out tonight, let’s all hope they use Avanti’s plastic cutlery from Neville’s trip rather than Carragher’s.