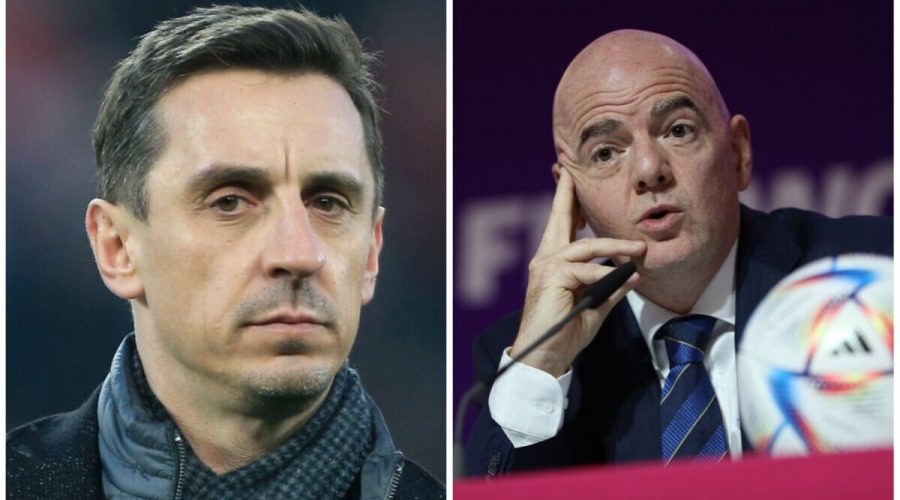 England and Wales to not wear #OneLove armband at World Cup

On Saturday, Infantino made a 52-minute speech in which he claimed to have many ‘feelings’, including feeling gay, disabled and like a migrant worker. He also claimed to understand being discriminated against as he had been bullied for having red hair as a child.

Neville, who has come under criticism himself for working for a Qatari-owned broadcaster, slammed Infantino as a ‘terrible face for football’. The clip was initially tweeted by BeIN Sports but has subsequently been taken down.

“He’s a terrible face for football. Some of the things he said yesterday were inappropriate and shouldn’t be said by him,” Neville said.

JUST IN: World Cup Fan Zone and stadium where England will play in hours empty

“He should be bringing people together. He’s the global representative of football. He shouldn’t be answering to one or two nations, which is what he seemed to be doing yesterday. He’s got to rise above it.

The former England defender added: “I’m sick of these leaders, like (Boris) Johnson, like (Donald) Trump, like Infantino, like (Sepp) Blatter who don’t unite, they divide. All their language is about division. Even though they try and think they’re bringing people together they’re not.”

Infantino’s strange monologue came on Saturday, 24 hours before Qatar opened the World Cup with a dismal performance against Ecuador. The hosts were comfortably beaten 2-0.

“My parents were working very, very hard and in very, very difficult conditions — not in Qatar, in Switzerland. I remember as a child how migrant workers were treated when they looked for work and I remember what happened with their passports.”

His rant came as a response to western media who he criticised over perceived hypocrisy. He claimed that Europe should be apologising for 3,000 years of history, not demanding apologies from Qatar over their poor human rights record.

The World Cup hosts have been scrutinised by human rights groups for their treatment of migrant workers, women, and the LGVTQ+ community, among others.