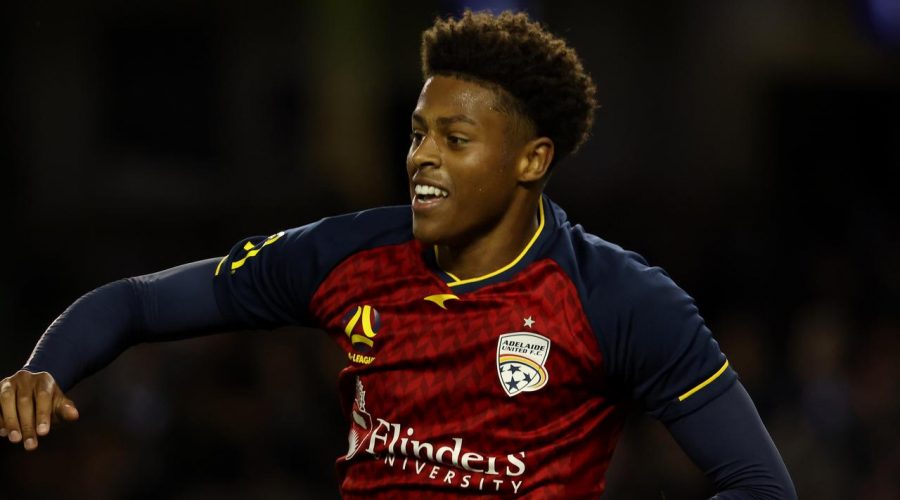 The youngster helped turn Saturday night’s contest on its head, coming off the bench and helping Adelaide United to a 3-1 win over their struggling rivals Melbourne Victory.

Yengi, who came off the bench in the 56th minute scored and assisted United’s second-half strikes which included a memorable celebration in front of a beleaguered Victory fanbase.

Melbourne was on the front foot early thanks to Jake Brimmer’s stunning free-kick but Stefan Mauk’s double either side of Yengi’s strike helped seal the comeback.

Victory’s response from last week’s drubbing was instant as Kruse had a hat-trick of chances to open the scoring but was unable to break the deadlock.

Their dominance finally paid off as Brimmer’s free kick slammed off the bar and crossed the line by a matter of inches to give the home side the lead.

Adelaide finally got back into the game as Mauk took advantage of Leigh Broxham’s scuffed clearance to equalise.

United’s momentum carried over into the second period as substitute Yengi broke past Victory’s Aaron Anderson and fired his shot against the post.

However, his time came only minutes later, tapping home Craig Goodwin’s cross and rubbing further salt in the wound by celebrating in front of the enraged Victory faithful behind the goals.

Yengi’s night wasn’t over but this time he turned provider crossing the ball to Mauk for his second and completing a brilliant turnaround.

Carl Veart’s young side are now into second as they have managed to stunt their patchy form at the beginning of the campaign.

“The boys have shown the last three weeks that when they get a bit of confidence it’s amazing what it does to a young squad,” Veart said.

“The response from the playing group was excellent … I thought we were fairly comfortable.”

Victory’s defence was yet again cut open as they succumbed to their eighth loss of the season and their fourth among a five home games.

They looked to have turned a corner early as they took the lead following an electric opening but once Adelaide struck – the story was all the same.

The fans are continuously meeting the players with choruses of boos at the final whistle and questions remain as to what the future has in store for under-pressure coach Grant Brebner.

“It is not the result we wanted,” Brebner said.

“We should have had a few more goals than we did in the first half.

“Structurally we were okay tonight, individually on every single we had enough bodies in the box to deal with it and it’s criminal to defend that way.”

Brebner said he understood the frustration of the supporters and doubled down on saying he will do all he can to turn their fortunes around heading into their next contest against Sydney FC.

“There is nobody in this building that isn’t trying to give our members and fans what they want,” Brebner said.

“I sat here last week really disappointed by the result and I feel for our members and fans because I sit here now joining them in their frustration.

Kusini Yengi proved in his 34-minute cameo that he is not only a fine footballer but would fit in perfectly in the world of professional wrestling.

However, it was his celebration which caught everyone’s eye as he leapt the advertising boards and doing his best Conor McGregor strut – taunting the vociferous Victory fans behind the goals.

Following his first A-League goal, every touch was met by boos as he stamped himself as (in wrestling terms) an “old-school heel”.

Adelaide United’s Kusini Yengi scored against Melbourne Victory and then did Conor McGregor’s billionaire strut in front of their fans 🤭pic.twitter.com/eHympMMo6t

Veart said he may have to “have a word with him” about.

“He’s learning his craft and we have to keep his feet grounded, we have seen tonight how dangerous he can be and he has a lot of confidence in himself.”

The veteran was on fire from the onset, creating opportunities, picking the ball up between the lines and testing Adelaide’s shaky back four.

His first-half in particular stood out which was the perfect kind of reaction following last week’s Derby drubbing and setting the tone for the way Victory wanted to attack.