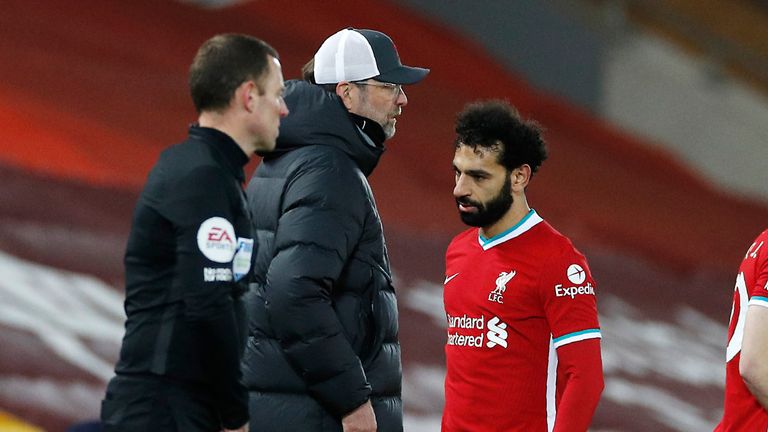 Jamie Carragher described Jurgen Klopp’s decision to substitute Mohamed Salah during Liverpool’s defeat to Chelsea as “strange”, with the Reds failing to find an equaliser on Thursday night and eventually losing for the fifth time in a row at Anfield.

Mason Mount had given Thomas Tuchel’s side the lead and, with Liverpool struggling to find a response, Klopp made the surprise move to take off the Premier League’s top scorer on 62 minutes and sent midfielder Alex Oxlade-Chamberlain on in his place.

It was the earliest Salah had been substituted in a Premier League game since September 2017 and the Egyptian was visibly unhappy with the decision, shaking his head.

The 1-0 defeat was a major blow to Liverpool’s hopes of salvaging a top-four finish from what is becoming a disastrous title defence and Carragher believes their struggles in attack – highlighted by Salah’s substitution – are now as much of a concern as their injury-hit defence.

“Klopp’s never been shy in taking Salah off the pitch,” said the Sky Sports pundit. “It’s not a case where he’s worried of taking his main player off. He’s taken him off in certain games where Salah has been poor.

“He’s a big goal threat, but a lot of the time where he’s been taken off in the past, Liverpool’s attacking play has been breaking down. You could understand it.

“He wasn’t at his best tonight, but it wasn’t one of those games where he was losing possession. He just didn’t have much of the ball. You’ve got to remember that Salah is not a great player with the ball. He’s better off the ball, making runs and scoring goals.

“Salah is a great goalscorer and what Liverpool have lacked is a goal, and it’s what they needed in that second half. I was thinking whether there was something in the number of games he’s played, but I don’t know. It’s hard to question Klopp, but I did think it was a strange one.

“When you need a goal late on, you need as many people on the pitch who can score you a goal, basically.

“It’s not the first time he’s done it and it won’t be the last. At this moment, even with Salah on the pitch for an hour, Liverpool didn’t look like scoring and that for me is a bigger problem than what’s going on at the back.”

The move picked up even more attention on social media when Salah’s agent, Ramy Abbas Issa cryptically tweeted a full stop, but Klopp was keen to play down the change after the match.

The Liverpool boss explained he had been concerned about an injury risk to Salah, who has made 37 appearances this season.

“When the boys look disappointed it is not a problem,” he said. “I didn’t see what Mo did.

“The reason for the sub was that – and I could have changed other players as well that’s true – but he looked in that moment that he really felt the intensity and I didn’t want to risk him.

“That’s all. I’ve known him a long time and it’s really rare as he usually looks fresh.”