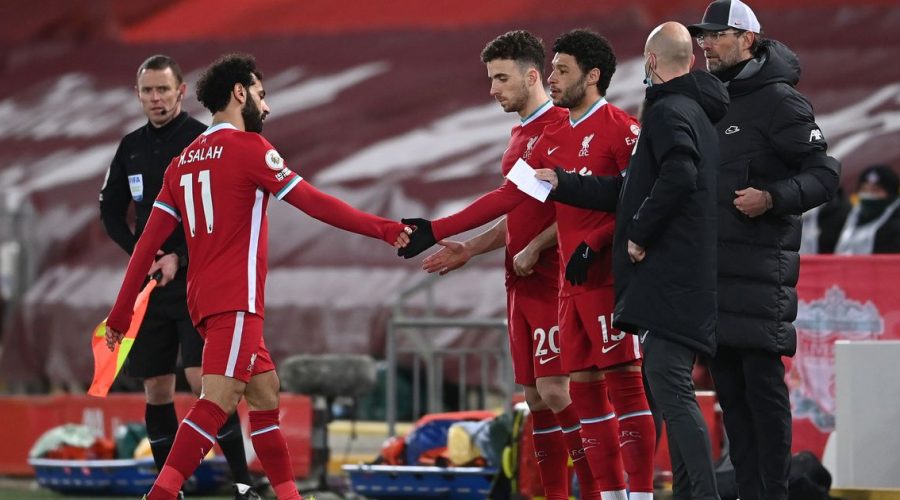 Mohamed Salah's agent made clear he was unimpressed with Liverpool boss Jurgen Klopp's decision to sub him off early against Chelsea.

Rammy Abbas Issa simply posted on Twitter a full stop, which was quickly picked up by Reds supporters.

There has been talk of Salah potentially seeking a move away from Anfield in the transfer market this summer.

And the move to withdraw him when Liverpool needed the Egyptian most will certainly increase speculation surrounding his future on Merseyside.

Salah had a quiet game against his old club at Anfield on Thursday night.

But with Liverpool now facing the very real possibility of failing to qualify for next season's Champions League, Klopp's call was a bold one given everything Salah has done in a red shirt in recent years.

Chelsea led the crunch clash 1-0 at Anfield after an hour when Salah was brought off.

Mason Mount's first-half goal meant Thomas Tuchel's side had the upper-hand at the time.

Yet Klopp opted to end Salah's night early, instead turning to Diogo Jota, who has been out injured since December, and Alex Oxlade-Chamberlain for inspiration.

Some of Europe's other elite clubs will have been looking on with big interest following the events at Anfield and on Twitter.

Real Madrid have long been linked with a move for deal to lure Salah to the Bernabeu.

After nearly four years on Merseyside, Salah's time with the Reds could well be coming to an end.

The Premier League star turns 29 in June and his contract expires in 2023.

It may mean it is in everyone's best interests for Salah to be sold at the end of the campaign.

March 4, 2021 Soccer Comments Off on Mo Salah’s agent in cryptic response to Liverpool star being hooked vs Chelsea
NFL News