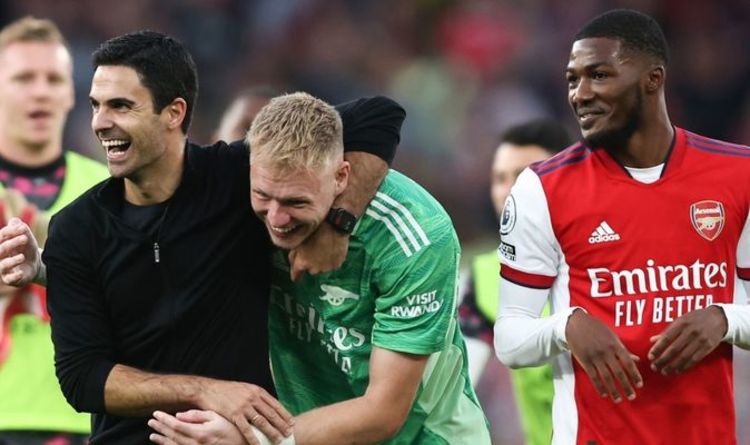 Mikel Arteta is not going to begrudge Arsenal fans of dreaming of the Champions League once again and the Spaniard is adamant it shows the Gunners are on the right track. His side will be looking to show their top-four credentials this evening when they visit Liverpool at Anfield, looking to cause an upset against Jurgen Klopp’s men.

Yet while Arsenal are the underdogs, they head north full of confidence and unbeaten in their past eight Premier League matches.

They were rooted to the foot of the table after the first three games of the season before turning their turbulent campaign around.

No team has taken more points than the Gunners since then and now Arsenal supporters are daring to dream of night under the Champions League lights once again.

And Arteta is keen to use that as motivation, suggesting it gives his players confidence that they are on the right track.

“For me this is positive,” he said on Friday. “It means there is excitement and they want to push us. This club is about being the best, not even about being fourth. So that mentality and drive is because of our history.

“Whether we can achieve it or not, we will see what we can do. But the level of expectation has to always be the highest.”

Arsenal’s progress on the field was evident on Monday night when they boasted three starters for England in their 10-0 demolition of San Marino.

Aaron Ramsdale, Bukayo Saka and Emile Smith Rowe were all named in Gareth Southgate’s side with the attacking duo both finding the target.

Arteta was particularly delighted for Smith Rowe, who has become a key cog in his side, for netting on his first international start.

“I saw him yesterday and he was delighted to score a goal for his country,” said Arteta.

“It is always special and he made us proud. Not only him but Bukayo and Aaron starting for the national team, I think it is a great sign for the club.”

Arsenal are expected to be handed a late fitness boost for the match from Thomas Partey, who did not seem likely to prove his fitness.

The Ghanaian did not play for his country during the international break due to the groin injury that ruled him out of the 1-0 win over Watford.

The Gabon captain sat out of his nation’s final World Cup qualifier vs Egypt before jetting back to London from Alexandria.

While Arteta refused to discuss what injury Aubameyang was suffering from, he did concede his captain had picked up a minor issue.