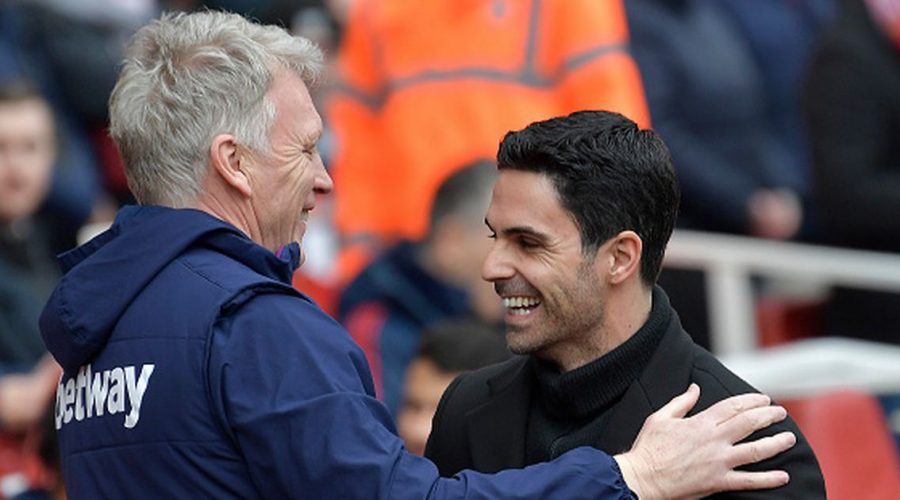 Mikel Arteta says he still confides in David Moyes and is pleased to see how the West Ham boss has rebuilt his reputation.

Arsenal boss Arteta spent six years playing for Moyes at Everton and credits him for having just as big an influence on his career as Pep Guardiola.

Arteta is not surprised Moyes has the Hammers pushing for a Champions League spot ahead of their clash with the Gunners.

And he claims it’s just reward after ill-fated spells at Manchester United and Sunderland left the Scot facing accusations of being washed up.

Asked if he was happy to see Moyes rebuilding his reputation, Arteta said: “Absolutely. I suffered when he had a difficult time.

“I didn't think it was very fair on him that he was given no time in some places.

“I know about his qualities and I'm glad to see that now he is enjoying it and doing what he is really good at. I can see his team being what he is.

“It would be an incredible step for them to qualify for Europe. They are not too far off achieving that.”

Arteta revealed recently how he is still in regular contact with Guardiola, who set him on the road to management by making him No 2 at Manchester City.

But asked if he still talks to Moyes too, the Arsenal boss said: “Yes I do. He was the one that introduced me to the Premier League and he has been a huge influence.

“First of all on a personal level because I think he made me a better person, made me mature in the earlier stages of my career.

“He was really demanding and challenging but at the same time really, really supportive.

“I learned a lot as well. He made me a much more complete player, he made me play in different positions and gave me a lot of responsibility as well.

“I have great memories with him and we had some great times together.”

Arteta was a key part of the Everton side which sneaked into the top four in 2005 and admits he has tried to use what he learned from Moyes at the Emirates.

He said: “I really liked how he managed the group as well as the individuals.

“He really installed a real belief around the club to be together all the time, to look after each other and nobody was more important than the team.

“He really created a special atmosphere when we were together. Everyone involved at that time really enjoyed our time together.”