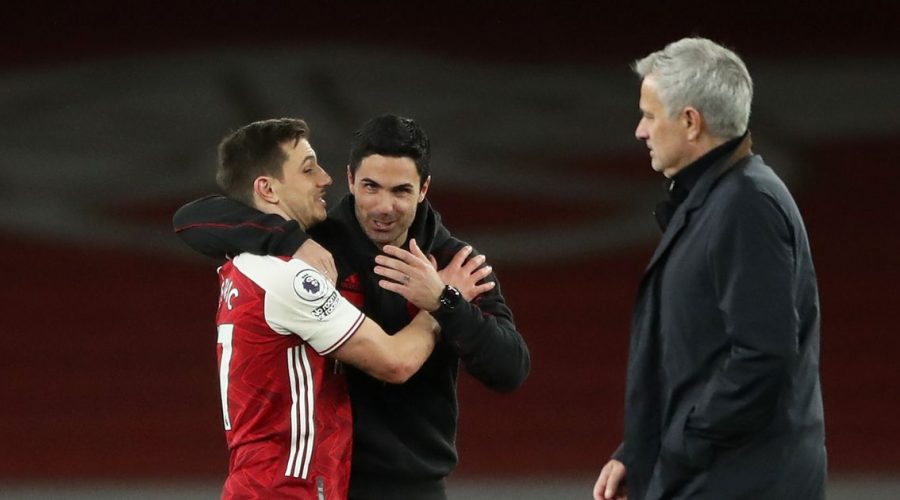 Arsenal legend Paul Merson has claimed that although Mikel Arteta acts in the opposite way to Jose Mourinho after a defeat, the Gunners boss is "thinking exactly the same" as his Tottenham counterpart.

The north Londoners suffered another dismal defeat at the weekend as Liverpool ran riot at the Emirates to reduce their already slim Champions League hopes to dust.

Arteta's men sit 10th in the Premier League and winning the Europa League now appears to be their only possible route into Europe's elite club competition next season.

The Gunners must beat Slavia Prague across two legs to set up a semi-final with either Dinamo Zagreb or Villarreal before the final in May, where they could face Manchester United.

Merson believes Arteta can turn things around at the Emirates, but did draw an unlikely comparison between the Spaniard and Spurs boss Mourinho.

He told Sky Sports: "I don't think it looks dicey for Mikel Arteta at Arsenal.

"When they get beat and he comes out and takes the blame, he's just doing the opposite to what Jose Mourinho does when he criticises his player, but Arteta is thinking exactly the same as Mourinho.

"Mourinho just says it and the difference is one manager has been around for a long time and he's won everything in the game.

"He can just say it exactly as it is whereas Arteta is just starting out and he's got to say the right things in front of the camera.

"However, when the camera is away, he'll be thinking exactly the same as Mourinho.

"That wasn't good enough from Arsenal against Liverpool. It was as bad as it gets, and Arteta will know it."

April 7, 2021 Soccer Comments Off on Mikel Arteta acting the opposite to Mourinho – but “thinking exactly the same”
NFL News