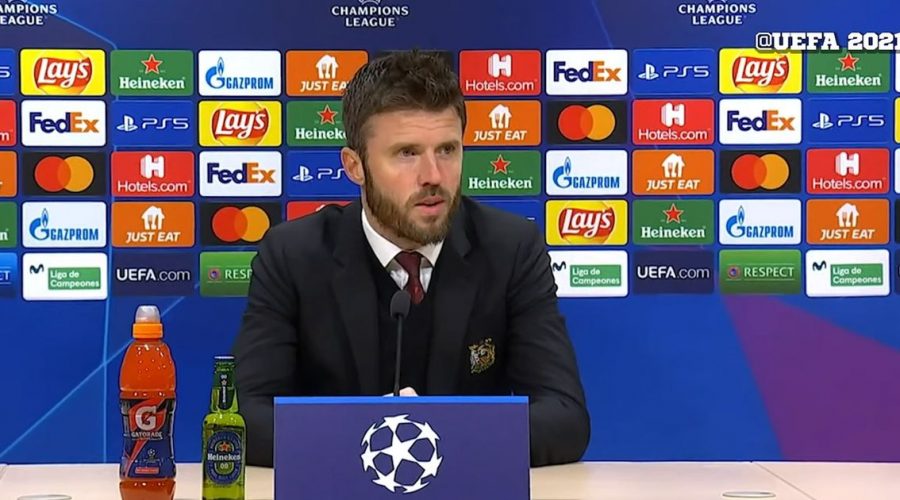 Michael Carrick has sung the praises of Jadon Sancho after the youngster got his first goal for Manchester United as they beat Villarreal 2-0 to secure a place in the Champions League knockout stage.

The attacker, who arrived from Borussia Dortmund over the summer for £73million, got his first goal in a Red Devils shirt as Carrick, in the dugout as caretaker manager, guided the northwest side to all three points in their fifth group stage match.

Cristiano Ronaldo scored a well-taken lob in the second half before Sancho buried the ball from close range past Villarreal keeper Geronimo Rulli into the top corner.

Following the match, Carrick lauded his side for the way they performed against the La Liga outfit.

“I thought the boys had to dig in at times, they showed a little bit of everything. I was delighted with the way it ended up.

"Let's be honest, we couldn't hope to come out here and play pretty football from the word go when you've suffered results-wise and you're not in a great vein of form individually and as a team, it's not easy to just come out and let everything click.

“In some ways, it was the best way to win as a team. We had to show some character, dig in and fight. It went our way at times, didn't go our way at times, it seemed like the game was going away from us at times, we got back together again and the subs made a massive impact towards the end.

Do you think Jadon Sancho can reignite his career under Michael Carrick? Let us know your thoughts in the comments section below. “It had a little bit of everything and that's all I can ask for. The players gave everything.

The Geordie boss then singled out the performances of some of his men during the match, praising two players that often have been criticised this season for their tepid displays.

"Fred's done fantastic, he's done what Fred does. He's done fantastic. Won the ball back, which we wanted to, we looked for that and yeah Ronaldo when he gets that chance, puts it away. That's another to his list.

“To finish it off with Jadon was brilliant, I know how much he loves the ball at his feet, making stuff happen, that's where he's the happiest, but I thought he put a real defensive effort in as well, it was a big night for him.

Sancho, 21, started for Man United against Watford but failed to make an impact as his side lost 4-1 at Vicarage Road, ultimately leading to the removal of Ole Gunnar Soskjaer as manager.

Carrick has since taken over in the dugout as the club seeks for an interim boss to take over until the summer.

I've said to the guys, it's not been an easy couple of days for everyone at the club, I can enjoy it so much but still, that result feels like it's for Ole, I can't get away from that.

We had a job to do without dwelling on it, things needed to be taken care of, and thankfully it all went to plan in the end.