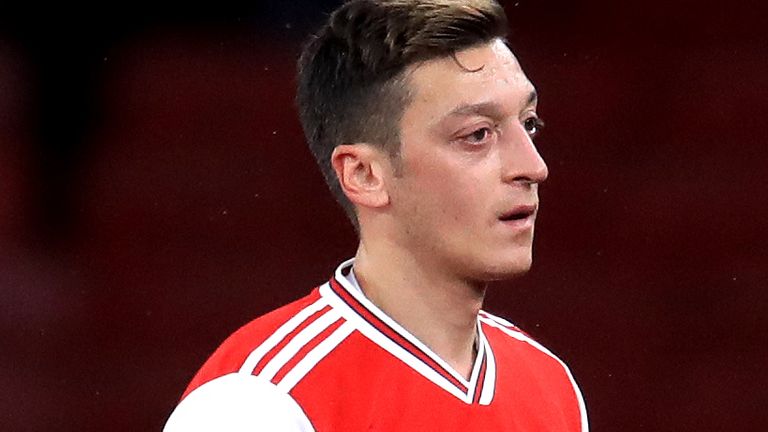 Mesut Ozil can leave Arsenal in the January window if the deal is right for both the club and the midfielder, says manager Mikel Arteta.

Ozil’s representatives are in talks with a number of clubs, including Fenerbahce and DC United – although the player’s priority is to see out his Arsenal contract until the summer – and Arteta has also not ruled out that possibility.

The 32-year-old, not registered by the Gunners for the first half of the Premier League season and has yet to be included in a matchday squad in any competition this season despite being one of the club’s highest earners, is free to talk to clubs this month with his current Arsenal deal expiring at the end of the season.

Ozil’s agent, Dr Erkut Sogut, has told Sky Sports News “in the next seven to 10 days it will be a little clearer” around the player who earns around £350,000 per week and has previously said he wants to see out his contract at Arsenal.

Quizzed about Ozil ahead of Arsenal’s FA Cup third-round match against Newcastle on Saturday, Arteta said: “If something is sorted this month [in the January transfer window], it’s because it’s good for both parties.

“Good for Mesut and his future, and good for the club. If that’s the case, we will move forward. If that’s not the case, the player will continue here.”

Pressed further on the issue, Arteta added: “A lot of decisions have to be made on players on all the time.

“To play them or not play them. We know that we have a very important player, a key player in the past few seasons for this football club.

“I had to make a decision [to drop him from the squad], and I made it. I knew the consequences of it. Now we are going to have to make another one in January.

“We must balance what is the best option for the team, the club and what the intentions of the player is, we must try and find a solution to that.”

According to Sky Sports News‘ Dharmesh Sheth, Arteta is being “very cautious” with his treatment of Ozil in case Arsenal fail to sign a creative midfielder during the January transfer window.

Arsenal came close to signing Lyon’s Houssem Aouar during the summer transfer window, but their failure to complete a deal for the Frenchman left Arteta short of options in a central attacking midfielder position.

Sheth told Sky Sports News’ The Transfer Show that he believes Arteta’s preference would be to sign a new attacking midfielder, but in the case that fails, the Spaniard is keeping his options open.

“I think Mikel Arteta is being very cautious with regard to Mesut Ozil this time,” Sheth said. “If we rewind back to the summer, it was clear that Mesut Ozil wasn’t part of the plans.

“It had gone so far down the line with Ozil that he didn’t want to do a U-turn then, so they didn’t end up with either in the squad.

“I think he’s going to leave it until the final half of this transfer window to decide on Mesut Ozil’s future.

“If it transpires that they can’t offload enough players to free up enough wages to bring in someone from abroad, then l don’t think you can rule out Mesut Ozil perhaps finding some sort of role at Arsenal in the final six months of his contract.

“I think the ideal scenario for Arsenal would be for someone to come in for Ozil – he’s eating up £350,000 a week in wages.

“But we can’t rule out Ozil still playing a part for Arsenal.”

Meanwhile, Arsenal defender William Saliba recently joined French side Nice on loan until the end of the season.

There is no option for the Ligue 1 club to make the move permanent as the Gunners see the 19-year-old as a part of their long-term plans, and hope Saliba’s return to France will provide him with some valuable experience before competing for a first-team place next season.

“We signed a big project, we had some issues with him because he has not played enough football in the last 18 months,” Arteta said of Saliba.

“At that age, at this stage of his development, that is crucial. Where he’s not having any game time, it’s very difficult and damaging for his future.

“I wanted to protect him and the best way to do that is give him minutes and play. He’s been really good with it. I see the development he’s made, the progression he’s shown.

“He’s going into a very strong league, a league he knows well, he has experience and he needs to play as many games as possible to be ready for us next season.

“He will come back, he will hopefully play a number of games and will progress in the right way.”

Arsenal are in the process of finalising the transfer for defender Omar Rekik from Hertha Berlin.

Rekik, 19, has been training with the club ahead of the move and is an U21 international for Tunisia. He will initially join up with the club’s U23 squad and it is understood a loan move has not been ruled out.

“We will announce it when we can, he’s a young talent and we have been following him for a while,” Arterta told reporters on Thursday. “We believe he has a very bright future, but we will give more details soon.”