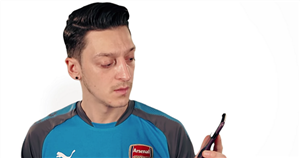 Arsenal outcast Mesut Ozil could announce his departure from the Emirates on Monday evening, and it’s perhaps more likely than imagined.

Ozil is set to “talk about the past, present and future” with a question and answer session on Twitter.

The Gunners outcast has been linked with a move to Fenerbahce with his Emirates contract up in the summer.

And while it may have seemed unlikely that such a high-profile departure would be announced by a player on social media, don’t count against Ozil doing so on Monday.

Ozil has not played for Arsenal boss Mikel Arteta since the beginning of March and could have a few harsh words to say on the Spaniard.

It comes with the 32-year-old having been exiled from Arteta’s Premier League and Europa League squads this season.

The former World Cup winner has previously said Arsenal are “really missing” former boss Arsene Wenger, and he may reiterate those thoughts on social media.

Then again, Ozil could stay clear of all Arsenal talk and tell tales about his younger playing days or where he sees himself in ten years time.

There are likely to be thousands of questions heading the former Real Madrid star’s way, and he’ll pick the ones he wants to answer.

But it would be odd for Ozil to tease such a revealing insight and then give little away.

It had been said by Arteta that a decision on Ozil’s future would be made in the “coming days” and Monday night seems the perfect opportunity to explain all. Though having previously been “saddened” by the lack of loyalty shown by the Gunners, a departure announcement could be followed by some scathing words.

Either way, the footballing world will be watching and should be in for a treat.

So grab the popcorn, and enjoy whatever the midfielder has to say…