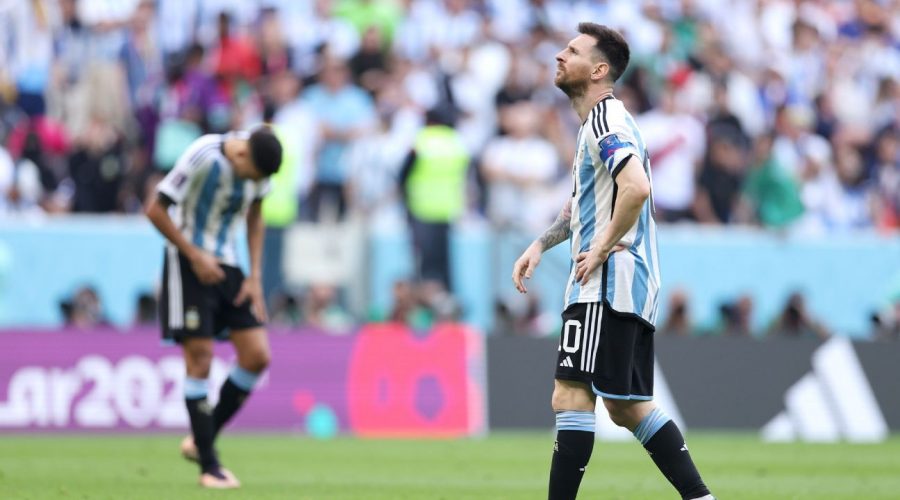 Lionel Messi told his Argentina teammates there are “no excuses” for their shock defeat to Saudi Arabia on Tuesday.

Argentina slipped to a 2-1 loss at Lusail Stadium despite leading in the first half through Messi’s 10th-minute penalty.

The result will go down as one of the greatest upsets in the history of the World Cup, but Messi insisted there is a way back for his team — one of the pre-tournament favourites — if they can deal with the setback.

“It is a very hard blow for everyone, we did not expect to start this way,” Messi said. “Things happen for a reason. We have to prepare for what is coming, we have to win, and it depends on us.

“There are no excuses. We are going to be more united than ever. This group is strong, and we have shown it. It is a situation that we haven’t gone through in a long time. Now we have to show that this is a real group.”

Saudi Arabia manager Herve Renard suggested afterwards that Argentina — 48 places above his team in the world rankings — might have lacked motivation.

Messi, however, insisted they had not taken their opponents lightly and told fans who have travelled to Qatar in their thousands that they will turn their World Cup campaign around when they face Mexico and Poland.

“My message to the supporters is to have faith,” Messi added. “We won’t leave them stranded.

“We knew that Saudi Arabia is a team with good players, that they move the ball well and that they push the [defensive] line a lot. We worked on it, but we rushed a bit. We have to go back to the base of who we are. We have to think about what’s next.”

Argentina arrived in Qatar as the reigning Copa America champions and on the back of a 36-match unbeaten run — they would have equalled Italy as the national team with the longest unbeaten run in history by avoiding defeat on Tuesday.

Coach Lionel Scaloni admitted afterward that the defeat was “difficult to absorb” but issued a promise that his team would still qualify from Group C.

“They scored two goals in their only two shots on goal,” Scaloni said.

“We continue to believe the same as we did before. The World Cup has this, you can be infinitely superior, and things don’t go your way.

“It’s never good to lose. We came into the World Cup in the best possible way, on a good run. We knew that it would eventually end.

“Fortunately, we have two group games, and we are going to get it done.”