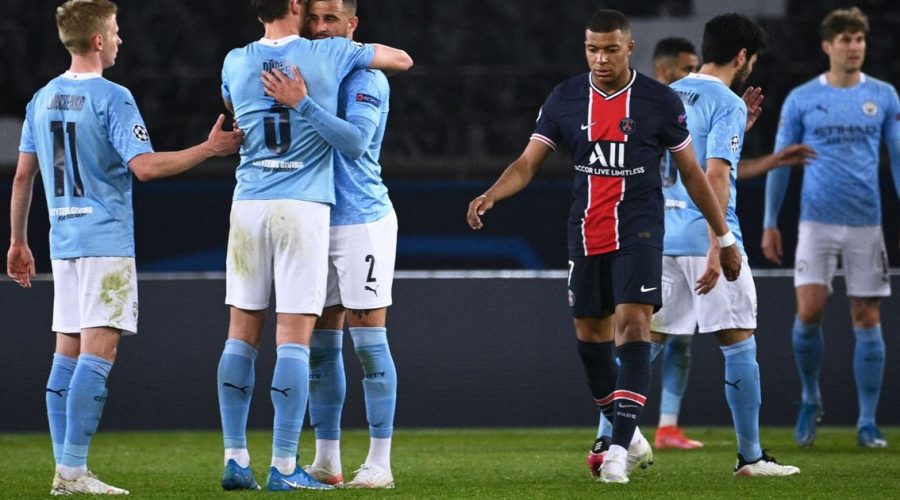 Paris Saint-Germain were beaten by Manchester City in their Champions League semi-final first leg on Wednesday night but some players are feeling the heat more than others.

Forward Kylian Mbappe has been destroyed in the French media, particularly in L'Equipe who gave him a three out of ten for his drab display.

The 22-year-old had just 30 touches, one less than City's keeper Ederson, and registered no shots on target in the uncharacteristic poor performance from the French international.

The publication doubled down on their criticism as they wrote Mbappe 'did not exist' in the match as defensive pair John Stones and Ruben Dias did enough to silence the star. Mbappe was impressive over PSG's two-leg quarter-final against Bayern Munich and he scored eight goals in five Champions League appearances prior to the City match.

His form slipped on Wednesday night but it wasn't just Mbappe who didn't perform well as PSG fell apart in the second half.

The French club were in control for the first 40, leading 1-0 at half-time thanks to a header from Marquinhos, but City came out firing in the second half to claim the 2-1 victory following goals from Kevin De Bruyne and Riyad Mahrez.

PSG goalkeeper Keylor Navas was given a dressing down by L'Equipe for his positioning for De Bruyne's goal. They gave him a four-mark rating that was also handed to forward Neymar.

While the publication was hugely critical of PSG, the team's own manager couldn't put into words why and how his side crumbled.

Mauricio Pochettino told BT Sport : 'It is difficult for them to explain why we were better in the first half, but they were more consistent in second half.

"I think it was difficult for us to cope with the demand and the physical condition.

"They were a little bit more aggressive, and it was difficult for us to recover the ball, sometimes it was a lot of possession for Manchester City, and of course it made it difficult to play."

Mbappe will be have a chance to prove his critics wrong as PSG play their second leg of the semi-final on May 4.

April 29, 2021 Soccer Comments Off on Mbappe savaged in France as PSG forward "did not exist" in Man City defeat
NFL News