‘The midfielders need to score more goals and Ruben scored three against BATE so he did well’: Matteo Kovacic admits admiration for Ruben Loftus-Cheek but warns Chelsea team-mate to expect fight for starting berth

Ruben Loftus-Cheek has set the goalscoring standards for Chelsea midfielders, but he has been warned he should still expect to fight for his place by team-mate and admirer Mateo Kovacic.

Loftus-Cheek’s midweek Europa League hat-trick against BATE came in only his first full match this season, one in which he has played more minutes for country than club.

But the England man has been advised to remain patient awaiting a Premier League breakthrough as Chelsea bid to extend their unbeaten start to the season at Burnley on Sunday.

Those in the know down at Stamford Bridge say new manager Maurizio Sarri does not quite ‘trust’ Loftus-Cheek enough yet to give him a regular starting role in their pursuit of the Premier League title.

And that is why the more experienced Kovacic, Jorghino and England team-mate Ross Barkley have been getting the nod ahead of a player who spent last season on loan at Crystal Palace in search of a regular game.

Kovacic sympathises, having left Real Madrid’s treasure chest of world-class players to make a better life on loan at Chelsea.

He said: ‘One day I play then the next day Ross, then Ruben, we have a lot of players. N’Golo [Kante], [Cesc] Fabregas, Jorginho, so a lot of quality in the midfield. It’s normal you can’t play every game so we are supporting each other. The season is long and we need every player.

‘We have a good team, we have 22 or 23 players who can always play. That’s really important for the full season. In the end, the coach chooses who will play but we are all prepared.

‘We are footballers but we are 25 players so we need to support each other.’

But he admitted Loftus-Cheek’s impressive hat-trick has set the standard the other midfielders must follow, as Sarri applies pressure to score as well as create goals. 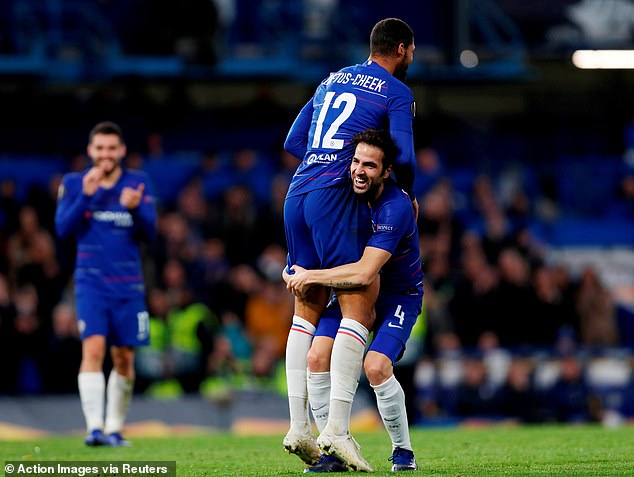 In a team lacking a proven goalscorer apart from Eden Hazard, who has been nursing an injury since last weekend’s draw with Manchester United, it is an essential asset.

Kovacic explained: ‘We are playing very nice football, people like it, but we can do much better.

‘The midfielders need to score more goals, me obviously, and Ruben scored three against BATE so he did well.

‘We need to play much better because we have a lot of quality in our team. I hope to score soon too, but in the end it’s important we play good football and push forward.’

With his long-term future to be decided at the end of the season, his only concern is surviving three matches a week and keeping Chelsea in title contention.

Known as The Professor for his linguistic skills, the 24-year-old concluded: ‘It’s good, I’m a little bit tired. I was not used to playing every three or four games and here it is very tough football. You can’t relax against anybody so it’s a little bit difficult but I really enjoy it.

‘There is no pressure. Why? We like to play football and we are enjoying every moment, every training session, so it’s just joy, not pressure.