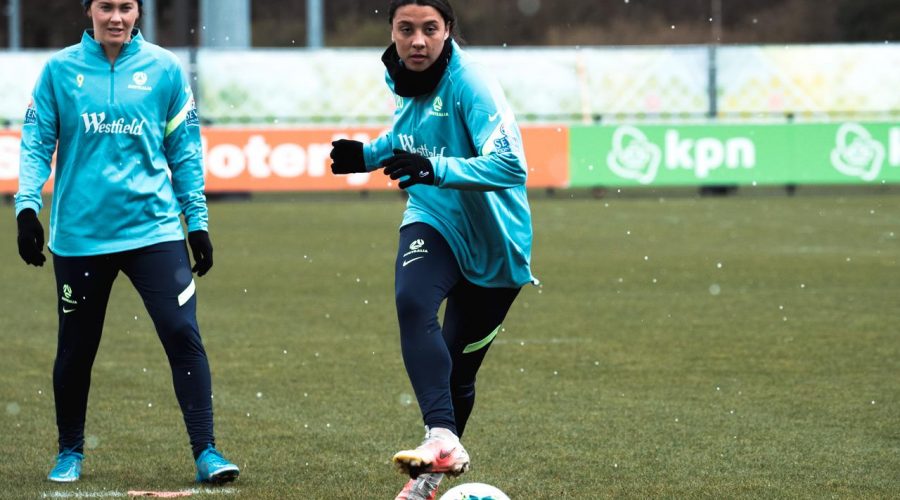 Returning to the Matildas was like reuniting with family for superstar captain Sam Kerr who was quick to endorse new coach Tony Gustavsson as “what we need”.

The national squad, consisting only of overseas based players. has assembled in the Netherlands ahead of two blockbuster friendlies against Germany and the Dutch outfit.

It will be the Matilda’s first matches since sealing qualification for the Tokyo Olympics in March last year, and being away from her teammates was “odd” according to Kerr. Players were unable to meet up due to pandemic-related travel issues.

But the positive vibe on reuniting was back almost immediately, aided by the positive energy of Gustavsson who has been signed to take the Matildas through the next two Olympic campaigns and the 2023 Women’s World Cup on home soil.

“It’s exciting. We have a new coach, a lot of new players in the team. It just feels good to be back in the Matildas gear and see all the girls again,” Kerr said.

“It’s been difficult, especially seeing other national teams being able to do things, but we’ve got to make the most of the opportunities we have now.”

“He (Gustavsson) is a nice guy, smiley guy. We haven’t had too much to do with him as of yet because it’s only been one session and the whole squad’s not in. But he seems like a really positive guy, seems like he knows his stuff and seems very to the point.

Sam Kerr has been killing it for Chelsea (Photo by Naomi Baker/Getty Images)Source:Getty Images

Gustavsson has booked a tough start to his coaching career for the Matildas with the matches against the two footballing powerhouses.

But Kerr said, despite not playing together for a year, that it was exactly what the team needed.

“They really put it on us, didn’t they,” Kerr said.

“But I think that’s great. All those teams have been playing multiple games like most of us in Europe. They’ve got some of the best players in the world.

“That’s what we want. We want to see where we’re at; it’s a good benchmark for us. There’s a lot of new faces and it is going to be a challenge, but Aussies love that underdog mentality, so I’m sure we’ll roll with it.”

Kerr has been in outstanding form for Chelsea, scoring a hat-trick in her last match and has scored a combined 10 goals in her past six outings across all competitions to top the WSL’s goal-scoring charts.

She called the last 12 months a “growing year” amid talk she is now the world’s best striker.

“For me, on the pitch, it’s been really enjoyable. I’ve been enjoying my time at Chelsea, we’ve been playing really well, winning a lot of games,” she said.

“It’s been a growing year for me, but also really, really enjoyable.”