A planned peaceful protest against the Glazer ownership of the Old Trafford club, which loaded £525m debts on the storied institution during the 2005 takeover and has since cost in excess of £1 billion in interest and fees, turned snarly.

Some of the crowd, numbering in the thousands outside the stadium with around 200 gathered at United’s hotel the Lowry in the city centre, reduced the powerful main message of being intolerant towards malignant owners with what Greater Manchester Police termed “aggressive and antagonistic” behaviour.

A group of over 100 breached security and invaded the pitch. Firecrackers and flares filled the air, while there were clashes with officers outside the ground.

While there were ugly scenes, the significant take away was the further empowerment of supporters to reclaim the game – an offshoot of the failed, greed-driven Super League.

But how did a protest that was long known about, with the mood of anger anticipated, manage to cause so much disruption? Was United’s security good enough? What are the laws around such gatherings and did the police fall in line with them?

Geoff Pearson, one of England’s foremost researchers on football crowds and the handling of them, was at Old Trafford on Sunday to monitor how the events unfolded.

He talks The Independent through a watershed afternoon in the game: 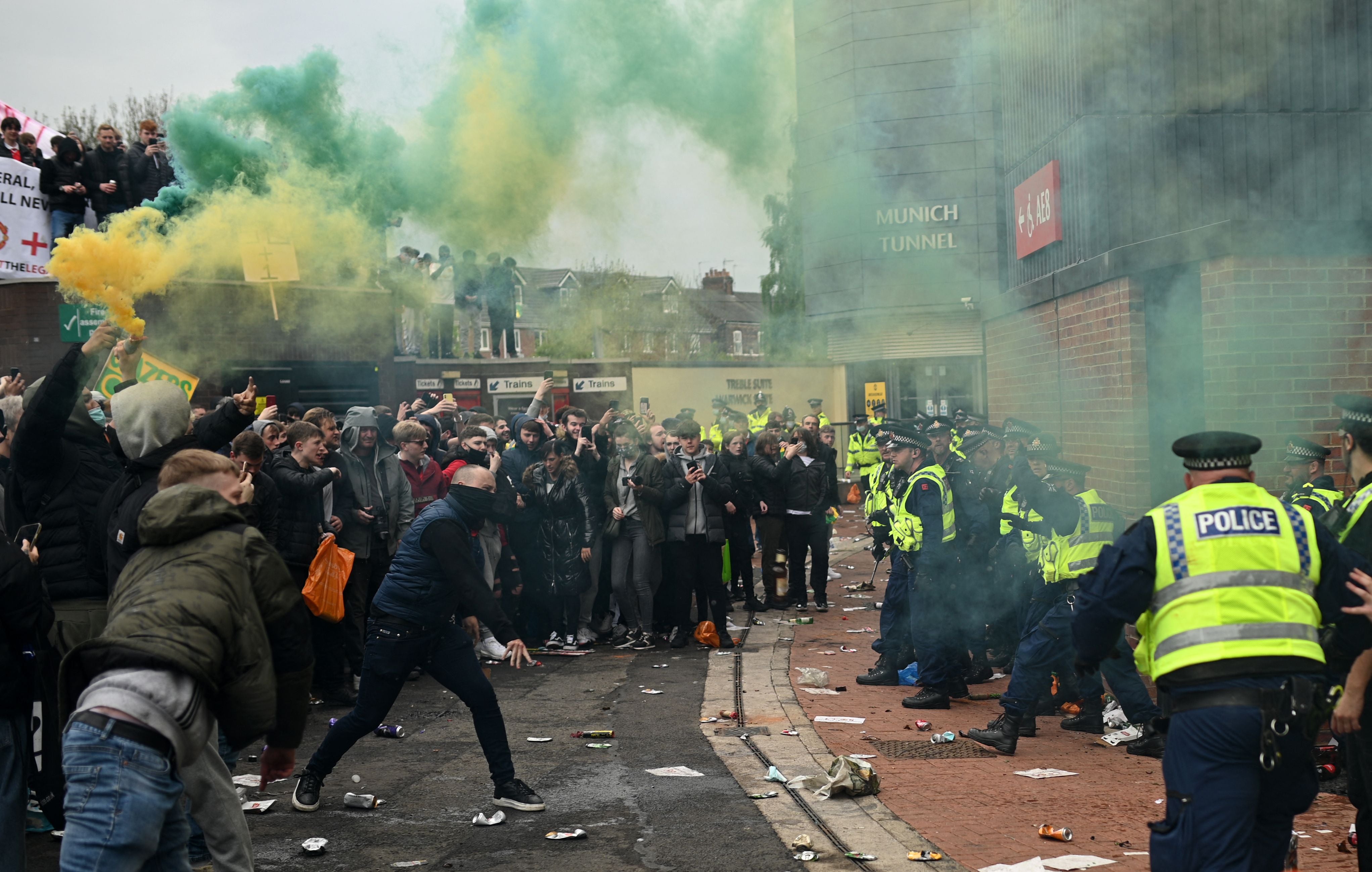 You had anticipated that the barriers outside Old Trafford wouldn’t be enough to control the numbers expected, that there would be congestion and markers for serious disruption…

The day pretty much went as I expected to, with the only surprise being that fans were actually able to get into the stadium and onto the pitch. The outer perimeter was waist high, a temporary fence with a few stewards on the side of it. The crowd that was gathering the other side of that fence was in the thousands. It all piled together on the road because they didn’t have the space which they were anticipating, which is the whole of the forecourt outside Old Trafford, which is a wide-open area.

I think it was always inevitable that the temporary barrier was going to be pushed through. Traditionally the forecourt has been seen as an area for Manchester United fans, that it’s there for them. Obviously, it’s private property, but it’s normally free to walk across and it has tremendous cultural significance. So ultimately if you’re trying to delegate that off from a protest that’s going to be seen as illegitimate by those fans that are protesting. That’s why they basically pushed their way through because they wanted to protest on the full forecourt.

Manchester United were expecting this protest, but seemed very light on security for it?

As I understand it, two fans kicked in an unguarded door, and they must have opened the gates for the rest of the fans who got into the stadium. They were inside for a significant period of time and from outside, we could see them at the windows at the executive boxes and the lounges. In that respect, it was a significant failure of security for Manchester United. The stadium should be a fortress, it’s designed to be difficult to get into. There’s been a quite significant failing of security at Old Trafford. The fans that I spoke to suggested there were many in the tunnel and claimed to be in the changing rooms as well, which would obviously undermine the Covid security of the event. I know that’s something that the Premier League is currently denying, but there were multiple accounts of fans being in the dressing room. Whatever way we look at it, it’s ultimately a huge failure of security from Manchester United.

What was the role of the police on Sunday?

Greater Manchester Police had a duty to facilitate protest under the Human Rights act. In allowing the protest to take place, they did what they were legally obliged to do. The issue with the outside perimetre fence was unfortunate. The protest was predominantly peaceful. There were smoke bombs and a large crowd that was challenging with little incidents of violence. It wasn’t like there was massive property damage that was going on in the main body of the protest.

Once you have a crowd of that number that have gathered as a police force, you’ve got two choices. One is that you allow the protest to continue, and you engage with that protest and you try to negotiate. The alternative is that you use force to disperse the crowd. What GMP did was they allowed the protest to continue, which was the right decision to do. And then at the end, they used force, they used horses, they used batons to disperse the crowd.

There has been a lot of talk about the ‘right way’ to protest. The point of it though is to be heard and force change, which often has to come about in a disruptive manner…

The immediate aim of the Manchester United fans protesting today was to disrupt the match. That was the starting point to show how against the ownership they are. These protests against the Glazers have been going on since 2005 and the one in 2010, which was entirely peaceful and entirely lawful, had no effect whatsoever. Fans have had enough, and they feel the best way to draw attention to the plight and to try and put pressure on the owners to sell up or relinquish control is through a disruptive protest like this. They fans have achieved more than I think they thought possible because they got the game postponed. For most in a protest, it is about disruption so your grievances can’t be ignored. This is why there’s such a debate about this new policing bill going through because that would limit the ability to carry out disruptive protests.

Tell us more about this bill…

It’s the Police, Crime, Sentencing and Courts Bill. It would basically allow the police to prevent protest gatherings, which caused people serious unease or annoyance. It’s incredibly far reaching and will incredibly limit the ability for active protest in this country.

What will be the fallout in terms of arrests from Sunday’s protest?

Some arrests took place already yesterday. Anybody that’s been identified throwing missiles, the police will look to take action over. The evidence gathering team will be mining the closed-circuit television all around Old Trafford. One of the interesting things is that it is a criminal offence to go on a football pitch during a designated match without lawful excuse, but actually developments in the law have suggested the protest may be a lawful excuse. It may be that any action taken against those fans would need to be perhaps a charge of aggravated trespass. The courts are somewhat overawed now as a result of Covid and the crisis in the criminal justice system. It could be years before some of these cases are actually heard if the individuals involved are identified.

May 3, 2021 Soccer Comments Off on Manchester United’s ‘significant failure of security’: How fan protest against Glazers unfolded
NFL News