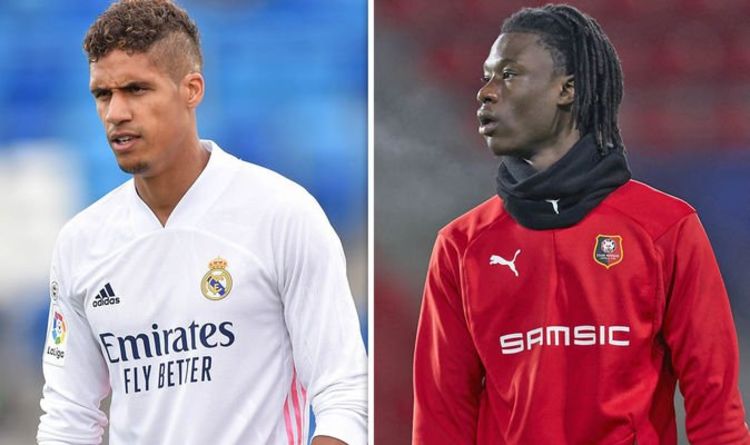 Manchester United are unlikely to sign both Raphael Varane and Eduardo Camavinga in the same transfer window, according to reports. Both players could leave Real Madrid and Rennes respectively this summer. But while Ole Gunnar Solskjaer admires the pair, they face a huge fight to bring both players to Old Trafford.

Manchester United have become notorious for having tricky transfer windows ever since Sir Alex Ferguson’s retirement in 2013.

But the Red Devils appear to mean business this summer, with the Glazers determined to give Solskjaer the backing he needs.

So far, United have already wrapped up two deals.

And, on Friday, they confirmed the return of Tom Heaton – who had left Aston Villa on a free transfer at the end of last season.

As things stand, United aren’t willing to stop there. They know more fresh faces are required to stop rivals such as Manchester City and Chelsea from hoovering up the big trophies next term.

Yet Sky Sports say that, while they’re keen to land both Varane and Camavinga, the chances of a double deal are ‘remote in reality’.

Camavinga has caught the eye with some slick showings for Rennes in Ligue 1, with the 18-year-old evolving considerably over the past two years.

But it’s claimed a move to Spain is the player’s most likely next destination, with Real Madrid long linked.

He has just one year left on his current contract over in France and a fee has been mooted in the region of £25million, though Rennes want to keep him and give him a new deal.

Regarding Varane, he’s another player who has just 12 months on his own contract over in Spain.

United are pressing hard to land the World Cup winner, who Ferguson had earmarked as a long-term replacement for Rio Ferdinand during his time in charge.

It’s claimed by Sky that initial talks have take place – but they’re not the only European superpower eager to secure his signature.

Paris Saint-Germain are also in the hunt, too, even if Mauricio Pochettino’s team appear to be closing in on the signing of Sergio Ramos following his own Bernabeu departure.

Yet Varane is the Red Devils’ top defensive transfer target and Solskjaer is hopeful he’ll be able to entice the 2018 World Cup winner to the club this summer.

Nicky Butt recently opened up on the centre-back and expressed a belief that United should do everything in their power to bring him to the club, a decade on from Ferguson’s attempt.

“For me, next season has to be about getting some silverware back in that trophy cabinet for Manchester United,” Butt said.

“I think we bought him when he was 32, and we went and won the treble with him.

“If Varane is available, then I’d go all out for him.”