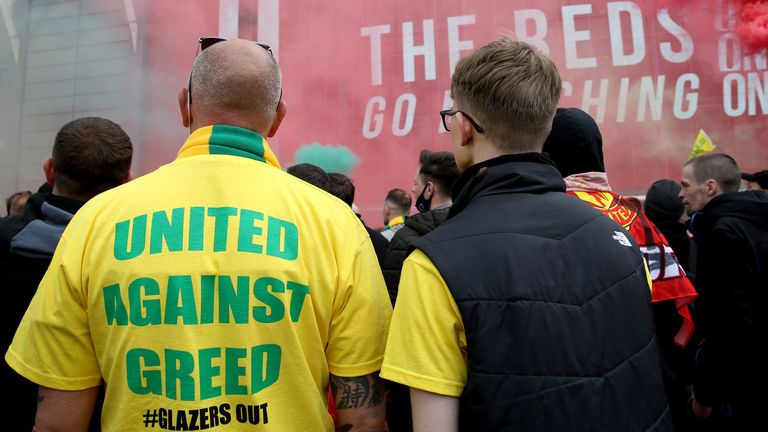 A group of Manchester United fans has launched a campaign to boycott the club’s commercial partners in a bid to put pressure on the club’s American owners, the Glazer family.

A statement posted on Twitter with the hashtag ‘NotAPennyMore’ trended on the social media platform as United supporters pledged their support for the plan to boycott the brands who are involved in sponsorships at Old Trafford.

Sunday’s game between Manchester United and Liverpool was postponed after fans that oppose the Glazer family’s ownership of United broke into Old Trafford.

The club’s Supporters Trust (MUST) wrote an open letter to co-chairman Joel Glazer, which included a ‘four-point reform plan’ which focused on more fan involvement in the running of the club.

The statement was addressed to the club’s “commercial partners” and said: “Your sponsorship money will be used for debt servicing and dividends. Supporting the Glazers does not support the club. It sustains a parasitical relationship.

“To that end, Manchester United fans will boycott your products, seek to tarnish your brands and support your competitors until you terminate your commercial partnerships with the Glazer family.

“Were sponsors to realise that partnering with the failed Glazer ownership undermines ‘brand infinity’ and ‘association with success’ and were to leave, then we’re sure United fans would once again embrace these companies for standing up for the values of the football club that the last few weeks have shown owners like the Glazer family do not hold.”

A member of the Glazer family has refused to apologise to Manchester United fans over the club’s attempt to form a breakaway European Super League.

Sky News US correspondent Sally Lockwood caught up with Avram Glazer in Florida and offered him the chance to address supporters’ concerns, saying: “This an opportunity for you – an apology perhaps?”

Mr Glazer was then asked if it was time for his family to sell the club, and if United fans were “just customers to you”.

But, after buying some groceries, Mr Glazer, in sunglasses, refused to engage and drove off without saying anything.

New footage has emerged showing a group of Manchester United fans being allowed to enter Old Trafford – where supporters staged a protest on the pitch which led to the postponement of the game against Liverpool on Sunday.

The video shows protestors entering the ground unchallenged. A source at Manchester United has told Sky Sports News that the video was taken some time after the initial breach of the stadium – at which point stewards had been told to adopt a non-confrontational approach.

Sky Sports News has also seen separate footage – which cannot be broadcast for legal reasons – that does show fans forcing entry after climbing a gate at the end of the Munich tunnel – before opening another door and allowing fans to access the concourse and the pitch.

May 5, 2021 Soccer Comments Off on Manchester United fans begin boycott of club sponsors in bid to put pressure on Glazers
NFL News