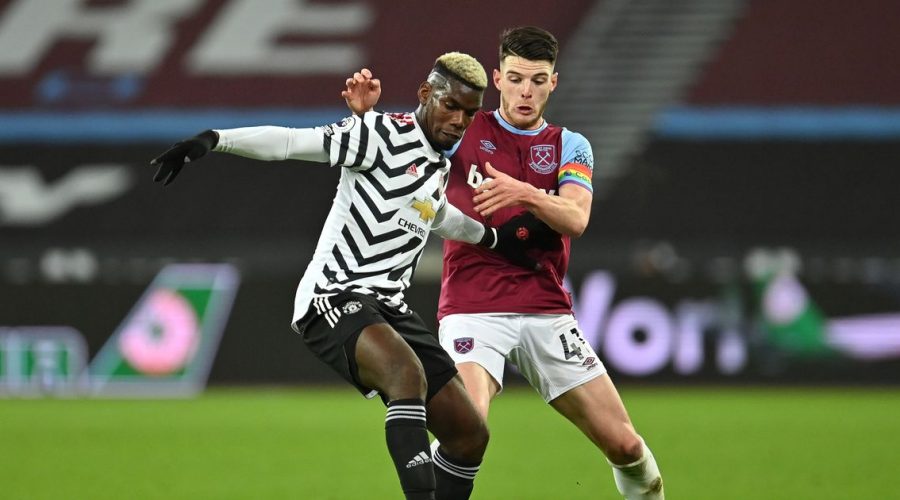 Manchester United are preparing to raid their Premier League rivals if Paul Pogba refuses to sign a lucrative new contract ahead of the summer transfer window.

Old Trafford chiefs will take to the negotiating table with Pogba and his agent, Mino Raiola, this month in a bid to tie the midfielder down to an extension.

But if the Frenchman turns down their £400,000-per-week proposition, United have no qualms about selling him rather than risk losing him for free next year.

As a contingency plan, the Red Devils have drawn up a three-man shortlist of midfielders to target in the case of Pogba's exit.

West Ham United vice-captain Declan Rice is among their targets after a fantastic season with the Champions League-chasing Irons.

Also a long-term target for Chelsea, the England international is considered one of the finest defensive midfielders in the league.

But West Ham are believed to value Rice, 22, at over £100million and this price tag could prove to be prohibitive for the Red Devils.

Leicester City's Wilfred Ndidi may be a more affordable option; the 24-year-old's steadfast performances at the base of midfield have helped the Foxes reach the FA Cup final and cement their place in the top four.

United's third target is long-serving Atletico Madrid stalwart Saul Niguez, who emerged from the academy ranks in 2013 and has established himself as a mainstay in Diego Simeone's side.

Which is the best player on United's three-man shortlist? Have your say in the comments.

Saul, 26, is the most attacking-minded player on United's shortlist, as he is able to play in a variety of advanced and wide roles as well as well as in defensive midfield.

In that sense the Spaniard is the most similar to Pogba of the trio, although it is understood United's preferred option is for the former Juventus man to commit his future to the club.